Lawrence has been a social studies teacher in Greenville County Schools for 17 years, with 10 years as a YIG sponsor. He especially enjoys working with seventh graders because he knows that what he is teaching them is opening their eyes and giving them a global perspective.

“Youth in Government gives students the opportunity to look at issues that are going on in the world and see how, for example, an issue in Africa can influence some aspect of our culture,” he said.

Last month, Lawrence took a group of seven seventh graders to the Youth in Government, Model United Nations Conference in Black Mountain, North Carolina. Over 250 students from across South Carolina were there for a competition where each small group of students, or delegates, represented a country and had to figure out how to solve a pre-determined problem within that country.

Woodmont Middle’s three teams were assigned to resolve problems with the loss of wetlands in Ireland, to end child slavery in India, and to deal with Belgium’s terrorist problem. 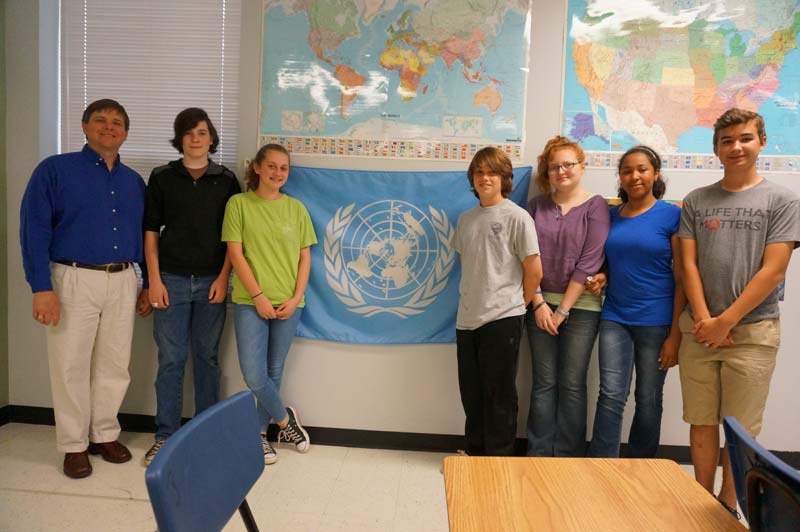 With Lawrence’s guidance, the students conducted research and submitted papers outlining their recommendations prior to the conference. In part, the presentation for the Ireland team stated, “We would like the United Nations to send scientists to Ireland to study the long-term effects of wetland development and to reintroduce European beavers.” They also recommended the development of a National Preserve in the wetlands areas, estimating the cost of the plan at about five million dollars. Monies would be repaid by charging admission to the Irish National Parks and Preserves.

“All of my teams did a great job,” said Lawrence. “I was absolutely blown away when they said the first award was going to the delegates from Ireland.”

Hanna Koupte, a seventh grader on the Woodmont Middle Belgium team, said the event gave her an opportunity to practice speaking in front of a large group of people. “Our delegation was assigned the task of dealing with the terrorist problem in Belgium,” she explained. “We asked the UN to help with that by increasing police and security on the borders.”