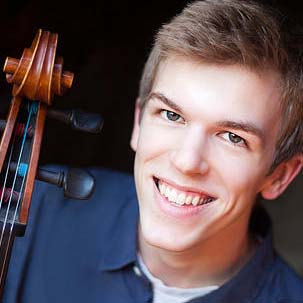 Seth Russell, a 2008 graduate of The Fine Arts Center, returns to his school with the nationally acclaimed Ceruti Quartet, artists in residence at the University of Memphis, at 7 PM on Thursday, November 5, in the Sutherlin Recital Hall at The Fine Arts Center. He received his Bachelor's degree in Cello Performance and a Performer's Certificate at the Eastman School of Music where he studied under David Ying, and received a Master's degree in Cello Performance at New England Conservatory with Paul Katz. Seth has also studied with renowned cellists Lluis Claret, Gary Hoffman, Ralph Kirshbaum, and Pieter Wispelwey.

Since its inception in 1994, the Ceruti Quartet has brought chamber music to audiences of all ages in performances described variously as "spirited, richly colorful, and incisive" and "intimately poetic." They have presented recitals in such venues as Weill Recital Hall at Carnegie Hall; the Goethe Institute in New York City; the National Assembly in Seoul, Korea; the Ford Center, MS; the Peace Center for the Arts, SC; and the Teatro Santa Isabel in Recife, Brazil. They have been featured artists for the Memphis Chamber Music Society; the Bechstein Hall Concert Series, AK; and the Fine Arts Center, Greenville, SC. In addition to its formal concerts, the Quartet has been dedicated to fostering chamber music in the next generation of audiences and musicians through teaching/performing residencies in Tennessee, South Carolina, Michigan, Georgia, and New York.

The members of the Ceruti Quartet are members of the string faculty at the Rudi E. Scheidt School of Music at the University of Memphis, where they also direct the string chamber music program. Quartet members have served on the faculties of summer programs, including the Colorado Music Festival, Garth Newel Summer Festival and the Interlochen Center for the Arts.
The concert also marks the return of Lenny Schranze, violist for The Ceruti Quartet for nine years, the chamber music teacher at The Fine Arts Center before leaving for the University of Memphis.

The Fine Arts Center, who served as host to the Swannanoa Chamber Music series this past July and August, is excited to continue its role in bringing upstate audiences world class chamber music with this performance of the Ceruti Quartet. The concert program will include Haydn's String Quartet in B-flat Major, Op. 76, No. 4 "Sunrise"; Samuel Barber's String Quartet, Op. 11; and Beethoven's String Quartet in C Major, Op. 59, No. 3.

Tickets will be sold at the door--$20 for adults, $10 for non-Fine Arts Center Students and $5 for students with their Fine Arts Center ID’s. The concert will begin at 7 PM, doors open at 6:30 PM.