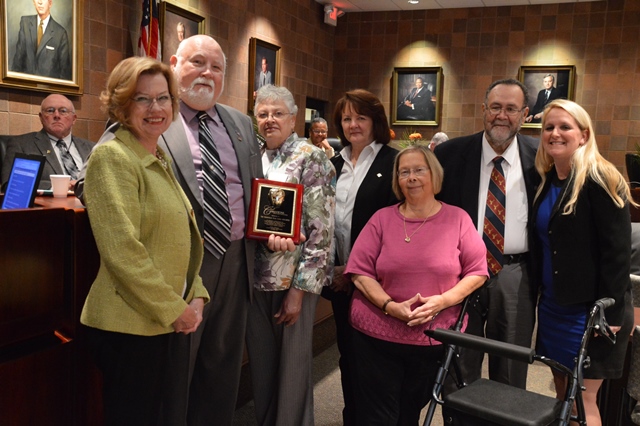 The Greenville Elks Lodge #858 BPOE has been named a Champion for Public Education by the South Carolina School Boards Association (SCSBA). The award was presented at Tuesday’s school board meeting to Elks Lodge representative David Loudin by SCSBA President Beth Branham. The organization was nominated for recognition by the Greenville County Schools Board of Trustees.

“Members of the Elks Lodge #858 BPOE are one of only two groups in South Carolina to receive the Champion for Public Education Award. You are one of the top champions for children and your partnership with Greenville County Schools serves as a model for other districts in the state,” said Beth Branham, President of the South Carolina School Boards Association.

“Without question, the Greenville Elks Lodge #858 BPOE has made a difference in our school district and schools,” said Superintendent W. Burke Royster. “We are very appreciative of the support they provide for our students, teachers, and families through their generosity and involvement.”

For many years, the Greenville Elks Lodge has demonstrated leadership in support of GCS programs. Through their generous financial support, the district’s music programs in elementary and middle schools have received thousands of dollars to purchase instruments and equipment. Other beneficiaries include Robotics Clubs at the elementary level, Blue Ridge High’s Future Business Leaders of America competitors, and the Riverside High Debate Team.

For the past three years, the Greenville Elks Lodge has provided dictionaries for every GCS third grader, as well as sponsored anti-drug and anti-bullying programs. The organization also conducted the Americanism Essay Contest for students in grades five through eight, including recognition with certificates and cash awards.

Elks Lodges across the nation, including Lodge #858 BPOE, recognize the importance of public education, offering thousands of dollars in scholarship money to deserving seniors who demonstrate a commitment to academic excellence and selfless service to their community.

To receive the SCSBA Champions for Public Education Award, recipients must: