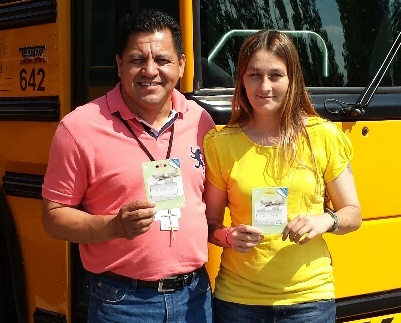 Robin became a bus driver four years ago because she wanted to be a role model for children. She realized she loved the job and because she is a mother of five kids it works for her kids’ schedule. She is currently a floater with the Donaldson Bus Center so her routes vary daily but she loves to drive and encouraged her cousin to apply because of the pay.

Ricky Tobar, originally from El Salvador, came from a family of bus drivers and even his wife drives for Greenville County Schools. After 20 years of working in manufacturing, he became a bus driver and 11 years later he still loves his job. He enjoys the kids, parents, and school administrators. He tries to set an example for the kids and he has learned a lot from them. He believes being bi-lingual has helped him with the kids. He recruited a friend to apply because it is a good job. He currently runs an elementary, middle, and high school route from the Golden Strip Bus Center.

Greenville County Schools is in need of 60 bus drivers for the upcoming school year. Pay starts at $12.80 an hour with no experience needed. Drivers are guaranteed 30 hours a week and receive benefits. Training is provided. If interested in applying visit the Human Resources area of our web site or attend a Job Fair at Lifelong Learning at 206 Wilkins Street, Greenville, from 8:00-noon on June 19, July 17, or August 15.