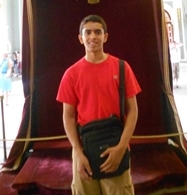 Southside High School student Nishesh Chaubey was selected as one of two alternates for the 52nd Annual U. S. Senate Youth Scholarship Program, to be held March 8-15 in Washington, D. C. Two students - Tanner Slagle from Conway and Brandon Muniz from Aiken - were selected the state winners. The second alternate is Qingyang Hu from Lexington.

The competitive, merit-based program was created to increase awareness of the three branches of government among young Americans and the responsibilities of elected and appointed federal officials. It is sponsored by the U. S. Senate. The Hearst Foundation covers all expenses for the trip.

This year, 644 nominations were made by South Carolina school principals and counselors. All students were given a 60-question exam. Students with the top 30 scores were invited to write a one-page essay on a topic focusing on U. S. history, the Constitution, or public policy at the state or federal level. The two students with the highest combined score were named as the state’s delegates by State Superintendent of Education Dr. Mick Zais.