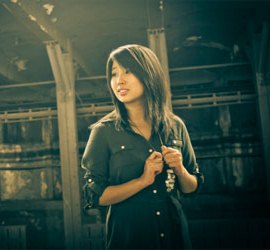 On Tuesday March 26, nationally touring independent artist, Kim Edwards will making a stop on her east coast tour to benefit Blue Ridge High School’s Theatre at the Ridge. Kim has been a featured artist on iTunes and Amazon.com as well as being chosen as Top Pick for 2012 by the Association of Music Podcasters. Her album, Wanderlust debuted at #92 on iTunes and is available to purchase also at kimedwardsmusic.com. Her current tour is her second east coast tour in the last two years and her singles “Oceans” and “Wanderlust” have been heard on NPR. The concert is sponsored in part by Coffee Underground and all proceeds go toward the Blue Ridge High School theatre department and its upcoming production of “A Midsummer Night’s Dream,” running April 26 and 27, which will feature two of Edwards’ singles on the productions soundtrack that will be distributed for the play. The concert begins at 7pm on March 26th. Admission is $5 and all patrons are strongly encouraged to fuel up on a Coffee Underground beverage and sandwich before, during and after the concert. For more information on Kim, visit www.kimedwardsmusic.com