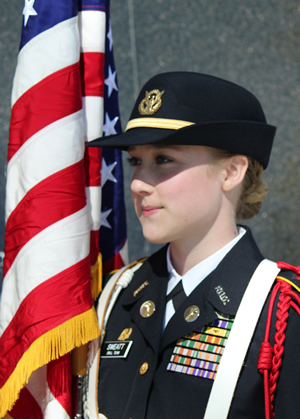 J.L. Mann High Academy student and Army ROTC cadet Battalion Commander Rebekah E. Sweatt received the Legion of Valor Bronze Cross for Achievement during a Veterans Day event. The award was presented by former recipient, Mr. Alan C. James. This award is estimated to be given to only one in 36,000 cadets from 4,000 brigades across the nation. It is given annually for achievement of scholastic excellence in military and academic subjects and is a rare and outstanding honor. In addition, Brigadier General Ray Royalty, Commanding General of the 95th Training Division at Fort Sill Oklahoma, was the speaker for the Veterans Day program.