Greenville County Schools Superintendent W. Burke Royster today announced the selection of Will Ragland, a drama teacher at Woodmont High School, as the 2012-13 Greenville County Teacher of the Year. 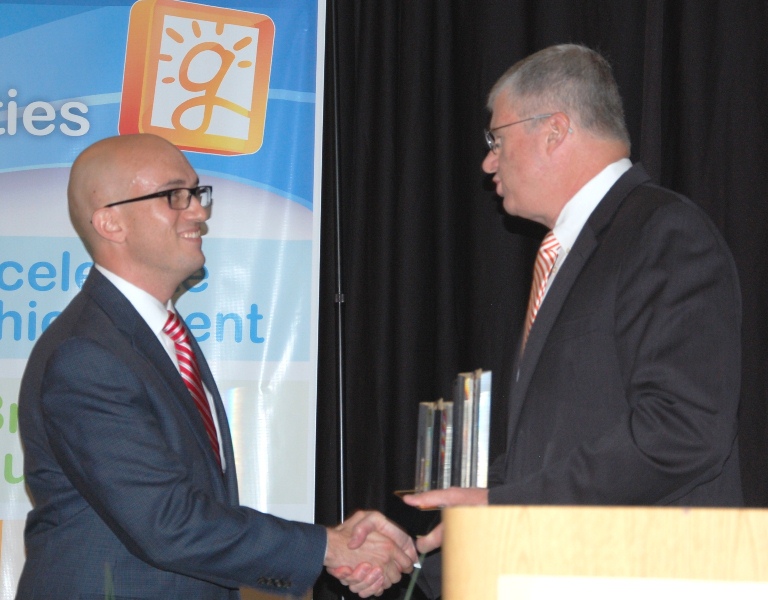 2012-13 Greenville County Teacher of the Year

Straight out of Davidson College with a degree in Studio Art, Will Ragland began performing in community theatre productions. His outstanding performance in the production of Oliver! caught the eye of a school district employee, who encouraged him to apply for a related arts teaching position at an elementary school. I became a teacher, almost by accident, and the job turned out to be a perfect fit, said Will.

Since that time, this newly-named Greenville County Schools Teacher of the Year has made great contributions to his school, community, and most importantly, to the drama students he teaches every day at Woodmont High School.

Ragland says his role as a teacher takes many forms, including coach, counselor, motivational speaker, therapist, entertainer, and second father. It is a role that is both scripted and improvised, depending on the response of the audience, and its ever-developing, he explained. We have our flops and our rave reviews, but the goal is always to improve and have a better performance tomorrow.

One of Wills most rewarding experiences was working with a student who had high-functioning autism, which caused him great pain growing up and made it difficult for him to connect with his peers socially. I heard that he had some experience in plays in middle school and encouraged him to audition for one of our productions. That lit the spark for a transformation in him that was hard to believe, said Will.

By his senior year, this student had been featured in every production and had become a self-confident, articulate leader who feared no theatrical challenge. He is now a college student and plans to major in theatre education and become a teacher. He is the perfect example of the rewards I find in teaching, Will said.

Ragland describes theatre as powerful, magical, collaborative, and fun. He uses these attributes to encourage students to stay in school and graduate. When I see a student walk across the stage at graduation and I know that I have taken a part in making that a reality, I feel a great sense of fulfillment. When I see one of my students discover a talent they never knew they had or find something that they love so much that they pursue it in college, its one of the best feelings in the world, he explained.

As Greenville County Schools Teacher of the Year, Wills message is simple: Donate your time, talent, and money. He believes public schools need the full support of all members of the community, and schools need the physical presence of their communities. I would encourage businesses and communities to get involved in their neighborhood schools and take a truly active part in public education, said Will.

In addition to a bachelors degree in Studio Art, Will earned a masters degree this year in theatre production from Central Washington University. He has had many opportunities to showcase his own talent with performances at local community theatres. He has the assumed such lead roles as Buddy Holly, Atticus Finch, Dr. Frank-n-Furter, Willy Wonka, Captain Hook, Sweeney Todd, and Scrooge. He was named a 2010 Greenville Firsts Best and Brightest 35 and Under, and is active in the South Carolina Theatre Association. His students have earned state and regional awards for their performances for the past three years.

Congratulations Will Ragland, 2012-13 Greenville County Schools Teacher of the Year!

Teachers of the Year Recognized by Local Businesses

Emerging Teacher of the Year

All Teachers of the Year

Teacher of the Year

School Teachers of the Year

The process of selecting the ten finalists began last fall when schools and centers selected their individual Teachers of the Year. Applications were first reviewed by a Screening Committee. Five judges then selected the Top Ten finalists and the District Teacher of the Year.

How Are the Finalists Chosen?

Each Top Ten candidate for Greenville County Teacher of the Year is judged on nine areas including those on his or her application form, a classroom visit, and an oral review. In the classroom, judges observe the teachers command of subject matter, classroom environment, communication skills, enthusiasm, creativity, and classroom management skills. During the interview, candidates are judged on his or her use of effective communication skills, organization of response, knowledge and command of subject matter, and substance and relevance of response.