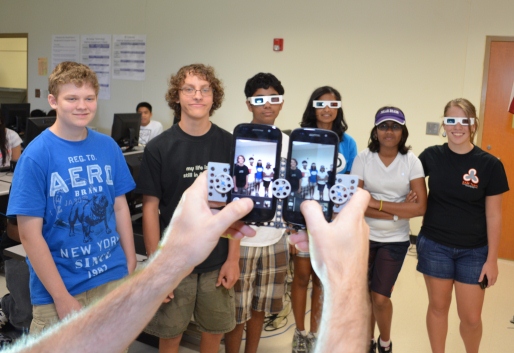 A pair of Android phones was used for creating 3D photographs, viewable with special 3D glasses.

This summer, students from four different high schools spent a week at Southside High Academy learning how to use both MIT's App Inventor and Java programming for creating Android phone apps, thanks to a $15,000 Google RISE (Roots in Science and Engineering) grant awarded to the AndSAM project, a collaborative effort between Clemson University and Southside High led by Southside computer science teacher Tom Rogers.

The summer computer camp was just one part of the AndSAM (Android--Southside Automated Machines) project, one of 26 winners chosen for the Google RISE Award from among 400 applications worldwide. The Project, which also includes an after-school program and various classroom activities, is aimed at bringing Android Phone power to K-12 STEM (science technology, engineering, and math) classrooms. The Camp was designed to give students a launch pad for AndSAM's other aspects and for continued learning in computer science.

With help from Clemson University's Matt Dabney, a PhD candidate, and Dr. Brian Dean, associate professor of computer sciences, students created applications, or apps, that included the use of animation, graphics, GPS, voice modification, and a host of other Android phone features. At one point a pair of Android phones was used for creating 3D photographs, viewable with special 3D glasses.

However, the camp was not just about pre-planned lessons. Given a few hours of instruction, enthusiastic students began spontaneously creating apps of their own design, such as the one programmed by rising junior Emily Johnston. She created a drawing app that uses red and blue lines, side by side, to yield a 3D image when viewed through special 3D glasses. 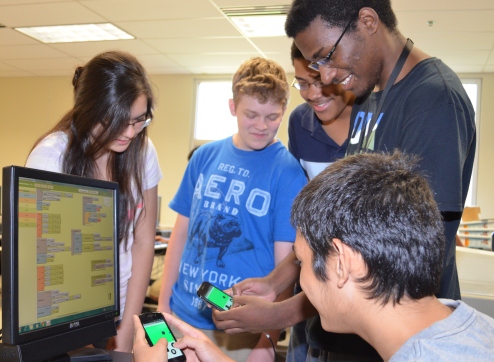 The summer computer camp one of 26 winners chosen for the Google RISE Award from among 400 applications worldwide.

"This class has taught me that the MIT App Inventor is an easier way to code than what I am using now," she said. "... Thinking into the future, it’s incredible what we will be able to do."

Building on what he had learned, Prateek Shah, a rising tenth grader taught himself how to tap into his phone's 3-axis gyro and used it to create a color-picking system in which a tilting motion of the hand made the image of a marble roll around on a color wheel, selecting colors in the process. In a like manner, Vicent Bravo, a rising junior created a two-person action game played on two separate phones linked by Bluetooth wireless communication.

As Clemson professor Dr. Brian Dean explained, “Cell phones are really part of the computing ecosystem. The fact that the students know about programming will give them an edge over other students when they go to college,” he said. “Hopefully, they will have some pretty bright career opportunities ahead of them.”

Ultimately, students who continue on to computer science classes at Southside or join AndSAM’s after-school program (called the SAM Team) will have the opportunity to develop apps that will be used in a variety of STEM classrooms for teaching, not just computer science, but traditional science and math in new and engaging ways. According to Rogers, Android phones not only contain a powerful computer, but also a number of sensors such as 3-axis accelerometer, a 3-axis gyro, GPS, and camera, that can be used for science and math experiments and demonstrations. Students involved in this aspect of the AndSAM project will gain real life experience in what it is like to develop software for a real-world customer.