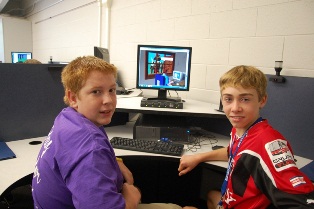 Erich Threlkeld and Nate Inman create a security program that keeps hackers away from personal data.

About 200 rising eighth and ninth grade students in Greenville County Schools are participating in the Innovation, Technology & Entrepreneurship Among Middle Schoolers (iTEAMS) summer camp at Hughes Middle Academy through June 28. 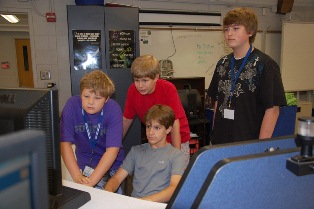 The program, sponsored by Greenville County Schools, the Governor’s School for Science and Math (GSSM), and private supporters, gives students the opportunity to experience careers in the fields of computer science and technology through team-based projects. Students are learning how to create apps for the Android phone, design video games, and develop security software for computers. 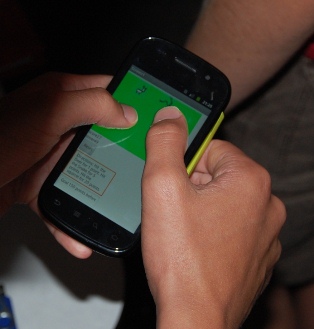 The Hunter Game allows the player to earn points by eliminating animals on the screen.

One team of rising eighth-grade boys developed a video game called Dragon Drag Racing where the dragon races down a track to a specified destination, turns around, and races back in record time.  Another team, comprised of ninth-grade girls, created The Adventure of Arnold Pickens video game where the main character is sucked into Ancient Egypt and has to find his way home.

Among other creative technology inventions is an app called The Hunter Game where animals pop up randomly on the phone screen and the user must eliminate them. As the deer, snakes, and squirrels are eliminated, the animals appear on the screen faster and the phone vibrates on every hit. The challenges in developing this app include how to make the phone vibrate, how to keep score, and how to reset the timer.

The cyber security session teaches students about having the right software to protect their computer and being conscious of what they post and how someone else will perceive it.

All participants create a commercial advertising their product to a specified target audience to be used on YouTube, television, and other websites.