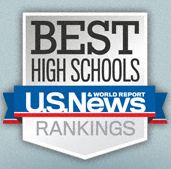 Berea High also Honored; Rankings awarded by U. S. News and World Report
Greenville Sr. High Academy has been ranked one of U.S. News and World Report magazine’s Best High Schools. The school earned a Silver Medal for its ranking at #10 in the state and number 1,152 in the nation. Berea High School received a Bronze Award and also made the list of Nationally Recognized high schools.

To determine which schools made the list, U. S. News and World Report evaluated nearly 22,000 public high schools in 49 states and the District of Columbia. Schools were awarded gold, silver, or bronze medals based on state proficiency standards, how well they prepare students for college, and other factors.

The scoring methodology was based on the key principles that a great high school must serve all of its students well, not just those who are college-bound, and that it must be able to produce measurable academic outcomes to show the school is successfully educating its student body across a range of performance indicators.

A three-step process determined the Nationally Ranked Best High Schools. The first two steps ensured that the schools served all students well, using performance on state proficiency tests as the benchmarks. A third step assessed the degree to which schools prepare students for college-level work.