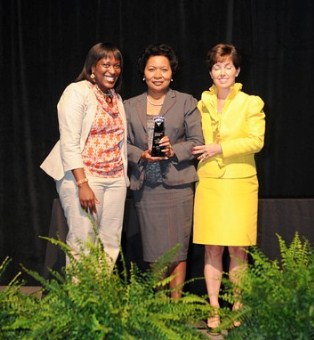 Greenville County Schools Superintendent Dr. Phinnize J. Fisher was among ten women who were recently honored with the Amy K. Stubbs Woman of Achievement Award, presented annually by the YMCA of Greenville to women who are well established in their careers, dedicated community servants, and have served as role models for other women. Dr. Fisher was honored for her contributions to education.

Dr. Fisher has served as superintendent of Greenville County Schools since 2004. As a direct result of her leadership and initiatives, Greenville County students have consistently outperformed their national peers on the Iowa Test of Basic Skills (ITBS), scored above the state average on the Scholastic Assessment Test (SAT), and exceeded the state and national averages on the American College Test (ACT). In addition, more students are taking AP courses and the percentage of AP tests taken by GCS students that score a three, four, or five has improved from 43% in 2005 to 56% in 2011. Likewise, 10th grade students passing the High School Assessment Program Exam on their first attempt improved to 82.9% in 2011.

While overseeing more than 70,000 students and 9,000 employees in the 49th largest school district in the nation, and a budget greater than $400 million, Dr. Fisher has championed high academic rigor, relevance for students, and enhanced student opportunities, even as she leads the school district through more challenging times due to recent State budget cuts totaling more than $50 million. Her educational philosophy focuses on connecting children to the purpose of learning, and helping them understand how success at school relates to a successful, fulfilling, and meaningful life.

Dr. Fisher is active in the community, serving on boards for the United Way of Greenville and the Public Education Partners Foundation. She is a trustee for Spartanburg Methodist College and is on the Board of Commissioners for Greenville Technical College. She is also a member of the Rotary Club of Pleasantburg, the South Carolina Association of School Administrators’ (SCASA) executive board, and the South Carolina Superintendent’s Roundtable. Dr. Fisher is currently serving as President of the Superintendent’s Division of SCASA.