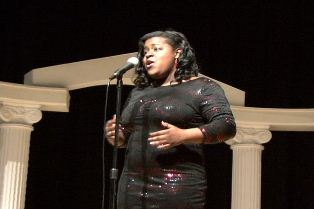 Brionah Pride from Riverside High School singing "Out on a Limb"

Last Friday night, an excited crowd gathered to cheer on the 25 finalists competing for Division winner honors for Greenville County Schools' elementary, middle and high schools and the "Best Singer in the District" title. Students from 23 different schools competed for the final honors. The competition began in late January with 69 students from 33 schools auditioning for the opportunity to compete last Friday night.

The three division winners are: 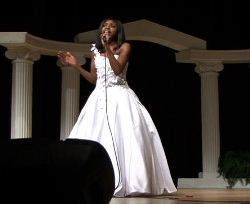 There was a "Sing-Off" between the three division winners and Brionah Pride from Riverside High School was named "Best Singer in the District." Brionah received the grand prize of $500, sponsored by Larkin's on the River, and the opportunity to sing at Larkin's Rhythm on the River concert series and the Arizona Children's Charities benefit. She will carry the title until next year's event.

Each of the three division winners will perform at one of the May "Rhythm on the River" concerts, sponsored by Larkin's on the River and Downtown Greenville.

The judges were Robin H. Jackson, owner of Arts-In-Action Music Studio in West Columbia, SC, Janice Wright of Greenville, a freelance music director and pianist, and Allyson Cox, curriculum coach for SC Leadership in the Arts and a performing musician (vocals and saxophone) with two local bands. This competition was a benefit for the Choral Music Department of the Greenville County Schools and over $3,500 was raised through ticket sales and sponsorship by Larkin's, 107.3 JAMZ!, HOT 98.1, Greenville Technical College, Arizona's Children Charities, Ingles, Next Level Entertainment, and the South Carolina Institute for Vocal Training.

This event was the brainchild of Robert Hoefer, director of Pitch Doctors, LLC and the South Carolina Institute for Vocal Training. Kenny "The Mac" Miles from 107.3 JAMZ! and Brittney "Ms. B" Brackett of SoulTrax were the emcees for the evening. 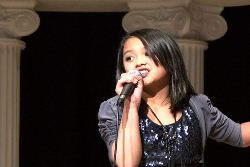 The purpose of the Best Singer in the District competition is to identify, encourage, motivate, promote and reward vocal music development and excellence within the Greenville County School District while providing needed financial funds and support for Greenville County schools' music departments.