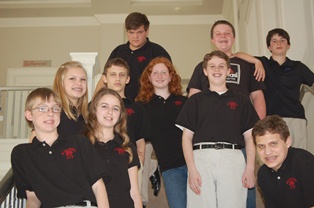 Recently at Chapman Cultural Center in Spartanburg, Blue Ridge Middle School defeated Sterling School with a score of 75 to 67 to bring home the 2012 Battle of the Brains championship and the $1,000 top prize. The team will compete at the national level in June.

Battle of the Brains is an awareness competition hosted by the program's founder and mentor, Bill Drake of WOLT 103.3 FM. Celebrating its 40th anniversary, Battle of the Brains is a competition of seventh and eighth grade students from 36 Upstate middle schools, including nine GCS middle schools, who go head-to-head to answer on-the-spot questions.

The top eight teams, called the Elite 8, compete for prize money and the championship. The winning team receives $1,000, first runner up receives $500, two eliminated finalists (including Hughes Academy) receive $250, and the remaining teams receive $100 each.