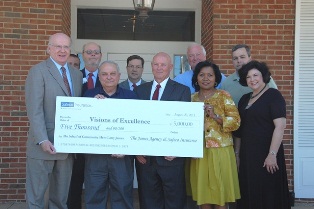 Greer businessman Larry James, President of the James Agency in Greer, was honored as a Community Hero by the Safeco Insurance Agency Giving Program for his contributions to Greenville County Schools. James was one of 14 honorees nationwide to receive the award and $5,000 for the Visions of Excellence program.

Larry James founded Visions of Excellence, Inc., some 20 years ago, with the goal of supporting Grenville County Schools teachers and students. The organization participates in events such as school supply drives, but is best known for creating and distributing teaching kits that help engage students by bringing other countries and periods of South Carolina and American History to life. The kits include hands-on items, posters and photos and books for teachers and students. Visions of Excellence also provides large library displays, including dinosaurs, American wildlife, and Civil War scenes that rotate between six Greenville County elementary schools.

The Visions of Excellence Program centers on arming teachers with interesting material to spark students’ interest in subject matters they are studying. Its programs depend solely on community support - support that James has kept alive and growing since he founded the nonprofit. James’ commitment to improving local education earned him the 2010 Citizenship and Service Award from the Greater Greer Chamber of Commerce.