Teachers have the enormous responsibility of ensuring their students learn in a safe and nurturing environment. This task becomes more challenging when students come to school hungry, homeless, or have social or emotional needs. The social issues students face are nothing new to our 2019-20 Teacher of the Year Susan McCoy.

While teaching at an elementary school, Mrs. McCoy had a student who was being raised by a teenage mother with little resources. “My God-given ability to see beyond the heart and true need helped me reach this student,” she said.  “He was a young man who didn’t have the easiest life – but now is a middle school principal,” she said, referring to Dr. Edward Anderson, principal of Tanglewood Middle School.

This amazing Teacher of the Year recently felt called to apply for a teaching position at Tanglewood. She interviewed, was offered the job, and accepted it. Just a few days later, though, McCoy thought she had made a mistake. She called Dr. Anderson back and turned down the job. But the decision weighed heavy on her heart, and she prayed for guidance. Not long after that, she received the message she had been waiting for: she needed to work for Dr. Anderson. She called him back, asked if the position was still available, and was happy to accept when Dr. Anderson again offered her the job. Mrs. McCoy will be joining the faculty at Tanglewood Middle in August, and is very excited at the opportunity to work for a former student.

As the mother of two sons, McCoy is passionate about keeping students away from dangerous situations outside of school. She volunteers for Switch, an organization that leads the effort to fight human trafficking and sexual exploitation in the Upstate.  “I’ve been trained in prevention and dealing with trauma in 13-to-17 year-olds and I’ve come to learn that if they have their head down one day, maybe it’s not just that they’re tired, or stayed up too long, but maybe there’s something else going on,” she explained.

She learned from her husband, who is a law enforcement officer, Greenville has the highest number of trafficking cases in South Carolina and the need for student prevention is tremendous. “I received training so I can work with victims of human trafficking. With my students being in the prime targeted age, this is invaluable training to better understand them. Many times we stereotype certain students and communities, when in reality they live in a world that is so foreign to most of us and are dealing with issues that are out of their control. I want to be able to help those in need find success,” she said. 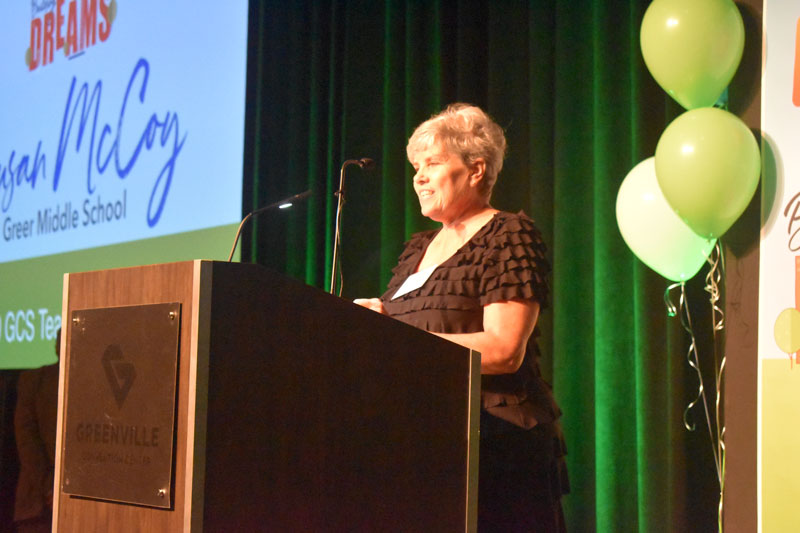 Susan McCoy attended the College of Charleston, earning undergraduate and graduate degrees, and earned 60+ hours in science education at Furman and Clemson universities. She is a volunteer with SWITCH SC Human Trafficking Prevention.

“In my classroom, students are redefining ‘home.’ Many have told me their vivid memories of their first day in an American school. They remember being hungry because they did not understand the lunch line procedures. They felt lonely because they could not communicate with anyone. I believe even small actions have a huge impact, so I try to turn their feelings of anxiety and fear into excitement and comfort.”

“My greatest contribution is simply the employability of my students. I love hearing success stories of former students who come back to visit, call, or text. They send pictures of themselves with certifications, classes they have taken, and huge first paychecks. There is nothing more rewarding than a student who has taken all the knowledge I have given him and surpassed what I can do.”

“In my music classroom, students are constantly challenged to express themselves through singing, playing instruments, moving, composing, and improvising. For example, as students perform, their classmates offer specific positive feedback, affirming their peers’ creative expression. Because of this supportive environment, students feel safe and accepted, allowing them to take risks with their learning, to create, and to collaborate.” 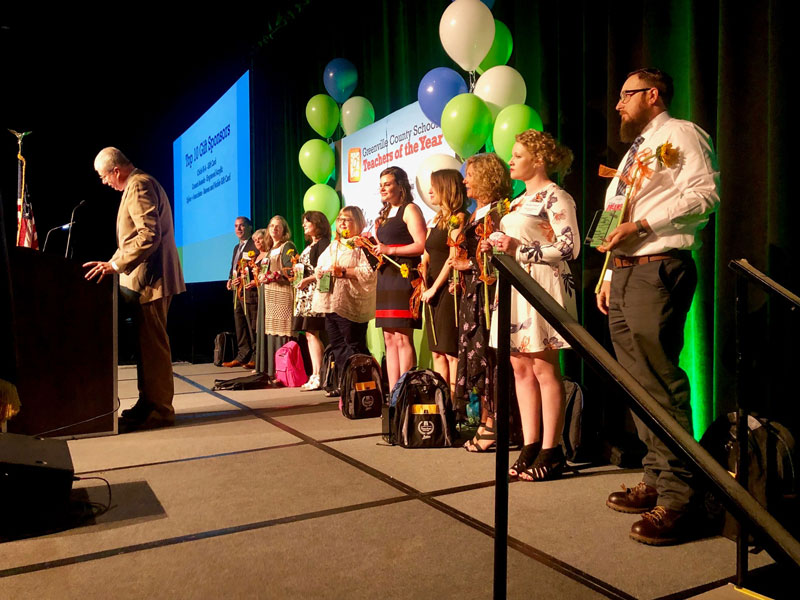 The 2019-20 Top Ten Teachers were honored at the Teacher of the Year breakfast.

School Teachers of the Year

The process of selecting the ten finalists began last fall when schools and centers selected their individual Teachers of the Year.  Applications were reviewed by a Screening Committee.  Five judges then selected the Top Ten finalists and the District Teacher of the Year.

How Are the Finalists Chosen?

Each Top Ten candidate for Greenville County Teacher of the Year is judged on the nine areas included on the application form, a classroom visit, and an interview.

In the classroom, judges observe the teacher’s command of subject matter, classroom environment, communication skills, enthusiasm, creativity, and classroom management skills. During the interview, candidates are judged on his or her use of effective communication skills, organization of response, knowledge and command of subject matter, and substance and relevance of response.

Special Thanks to Our Sponsors