On the evening of Oct 15, 2018, Lake Forest Elementary School Principal Julie Cooke was driving home from work when she witnessed a horrific hit-and-run accident involving an automobile and a cyclist on Woodruff Road.

As the cyclist slowed to turn left onto Anderson Ridge Road, an unknown driver traveling at a very high rate of speed slammed into the cyclist from behind, launching both the rider and his bicycle into the air. The bicycle flew directly over Principal Cooke’s car, and the cyclist landed in the middle of Woodruff Road, knocking him unconscious and leaving him directly in the path of oncoming traffic. 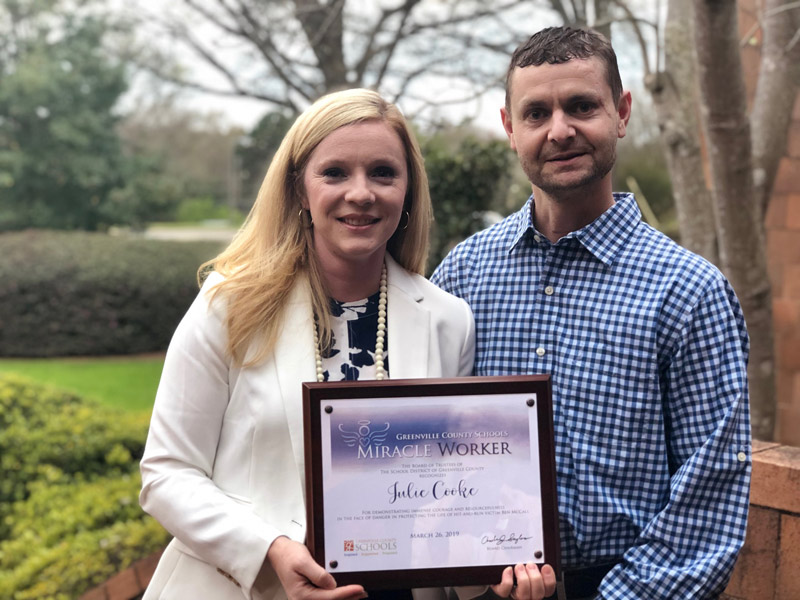 The sun had begun to set, making it extremely difficult for approaching vehicles to be aware of his presence in the road. Fortunately for the cyclist, Principal Cooke immediately stopped to help. With little regard for her own safety, she placed herself between the downed cyclist and oncoming traffic, using the only tools she had at her disposal to alert oncoming vehicles to stop -- waving her arms and her cell phone flashlight. Principal Cooke was almost hit herself but remained on the scene until traffic was fully stopped and emergency services had arrived to tend to the cyclist.

The unconscious and vulnerable cyclist almost certainly would have been run over by the fast-moving traffic had it not been for the quick and selfless actions of Julie Cooke, and her heroism undoubtedly is a primary reason that he is alive today. In fact, the first car to approach the scene after the accident stopped only a few feet in front of the cyclist after being alerted by Principal Cooke.

Unbeknownst to Julie, the cyclist whom she so selflessly assisted and protected is also a Greenville County Schools employee, Ben McCall of our Education Technology Services. Principal Cooke stayed with Ben and prayed for him until the police and paramedics arrived, and then continued to assist by providing valuable information concerning the accident and a description of the hit-and-run driver.

After months of surgeries and rehabilitation, I am thrilled to announce that Ben and his family are able to be here with us tonight. It is a long road to recovery, but Ben is determined and has had extraordinary support from his family and friends, including many special people here at Greenville County Schools.

Principal Julie Cooke, by acting swiftly and without regard to your own safety, you saved the life of Ben McCall. We are honored to present you with the Miracle Worker award for your bravery and your great courage in the face of danger while helping another in their time of need.