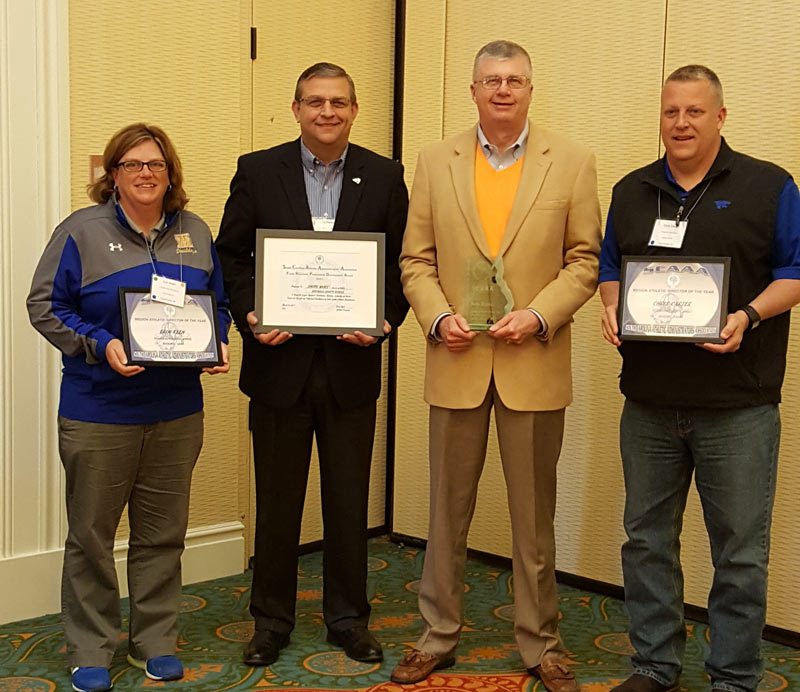 Greenville County Schools’ Superintendent Dr. W. Burke Royster was named the SCAAA Superintendent of the Year, which is awarded each year to a superintendent who has shown outstanding leadership and support of athletics on the local and state levels.  The nomination must be made by an athletic director or principal.  According to GCS District Athletic Director Darryl Nance, “Dr. Royster has completely changed the game of athletics in Greenville County Schools. His commitment to implementing a three year plan that addresses every need from supplemental pay, number of sport supplements, transportation, field maintenance, facility maintenance, and professional development support has created great momentum for our school programs and coaches to achieve and provide the best for the student-athletes across the District.”

Speaking of Nance, the former Wade Hampton AD was honored with the National Interscholastic Athletic Administrators Association (NIAAA) Frank Kovaleski Professional Development Award for South Carolina.  Nance will go on to compete for the Section and National award later this year.  According to the NIAAA website, “The Frank Kovaleski Professional Development Award is presented annually to an NIAAA member who has made significant contributions and demonstrated excellence in professional development at the local, state and national levels. The board selects a recipient from among the eight section nominees each year.”

Since 1993, SCAAA has coordinated the Spring Conference for Athletics.  The conference provides information and professional development courses for athletic directors, and brings all South Carolina High School League (SCHSL) classifications together to meet and conduct business for the upcoming school year.  The SCHSL holds its Legislative Assembly at this conference; the SC Athletic Coaches Association and the SC Association of School Administrators also participate in the conference.