Humanitarian of the Year 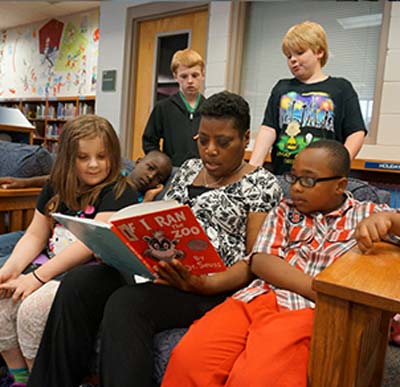 Judie Johnson cried every day for a month when she first became a school bus driver in 1985. She was driving a special needs bus for Washington Center, where her daughter attended school. “I cried so much because of the seriousness of every child’s condition,” she said.

As a bus driver, Ms. Johnson considers every child to be her own. “I always told students they were riding the learning bus. If they learned how to buckle their seat belt or if they recognized their name, I was so proud of them. I tell people to be patient, to teach their child simple things like how to write and to do it over and over again until they get it,” she said.

Duncan Chapel Elementary Principal Dr. Stephanie Lowry commended Ms. Johnson for her gentle and compassionate nature. “She rewarded several students for excellent behavior by giving them five dollars for the book fair,” explained Dr. Lowry. “She had been working with them on their bus behavior and over time they improved and earned the reward. I’ve seen their behavior improve at school, too.”

Ms. Johnson plans to return soon to the Special Needs Transportation Department as an on-call driver, and she wants to volunteer at Duncan Chapel Elementary. “At least I will still be a part of the children’s lives. I want to come back so I can keep an eye on everybody,” she said with a smile.