Board Members Saylors, Baxter Nominated for Positions on SCSBA Board of Directors 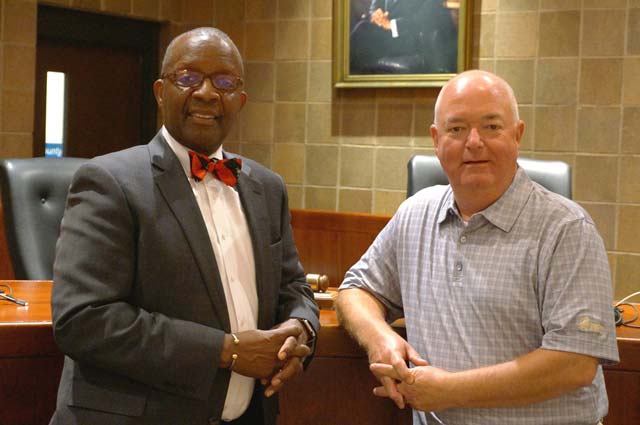 Greenville County School Board Member Charles J. (Chuck) Saylors (Area 20) has been nominated for the position of secretary on the Board of Directors of the South Carolina School Boards Association. In addition, Kenneth Baxter, School Trustee for Area 25, has been nominated to serve as the state representative for Region 15 (Greenville County), replacing GCS Board Member Danna Rohleder, who served two terms in that capacity. The election will be held in December.

Serving as a GCS Trustee since 2002, Saylors is a past state president for the South Carolina PTA and served as the first male National PTA president from 2009 to 2011. He served as president of the National Federation of Urban and Suburban School Districts (NFUSSD) in 2014 and is a member of the Board of Directors for the South Carolina Association of School Administrators (SCASA). Mr. Saylors serves professionally as Vice President for the Construction Management Division of M. B. Kahn Construction Company.

“One strength I bring to the table is relationships,” said Saylors. “I am ready to join the leadership team at the state level to share best practices and to strengthen relationships between administrators, school boards, and parents.”

Baxter joined the GCS School Board in 2012. He is a retired logistics manager with AT&T and has worked as a special education paraprofessional for eight years. He is past president of the School Improvement Council at Carolina High & Academy, and previously served as coach for the Lady Trojan Varsity Tennis Team and Boys Golf Team at Carolina. He serves as a board member for New Horizon Family Health Care and co-chairman for the Sigma Beta Club for young men.

“Being a teacher, parent, and businessman has helped me in my role as a school board member,” said Baxter. “I can see things from different perspectives. This will be helpful as we work to make the Association stronger.”

Both Saylors and Baxter extend their sincere appreciation to Danna Rohleder for her six years of service as a representative for Greenville County Schools on the SCSBA Board.