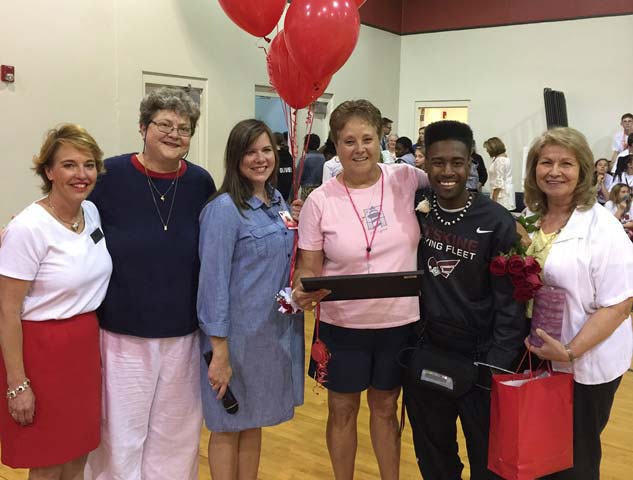 Paula Monroe, physical education teacher at League Middle Academy, has been recognized as the 2014-2015 Outstanding Jump Rope for Heart and Hoops for Heart Coordinator for the State of South Carolina.

Seven years ago, Paula Monroe was teaching class when suddenly one of her students collapsed due to a massive heart attack. She set into motion her emergency action plan and began performing CPR. The student was eventually airlifted to Charleston where he underwent surgery to correct a congenital heart defect.

After this incident, Ms. Monroe initiated holding a Jump Rope for Heart/Hoops for Heart event to raise funds to donate to the American Heart Association in the student’s honor. The annual event is called “Dodging for Heart Disease” which is a double elimination dodge ball tournament. Over the past seven years, with the help of Paula’s leadership, League Academy has raised over $14,000 to help fight heart disease.

The student whose life was saved is now a senior in high school and after several surgeries, he now has a pacemaker. He has plans to go to college and become a pediatric heart surgeon. He also goes back each year to the event at League Academy that is held in his honor and speaks to the students about the importance of raising funds for the American Heart Association.