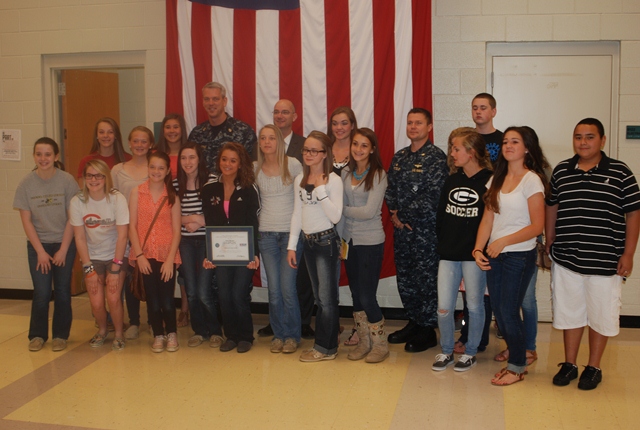 Greer Middle Principal Scott Rhymer was presented a Patriot Award by the United States Naval Reserve for supporting employee participation in America’s National Guard and Reserve Forces. Lieutenant Commander Huffstetler and Chief Robert Wootton participated in the award ceremony. Both officers are attached to the Navy Operational Support Center in Greenville. Mr. Wootton described Rhymer as the most supportive employer he has had in his 20-plus years in the Navy Reserve.  LCMR Huffstetler thanked Mr. Rhymer for his patriotism, devotion and dedication to our country. Mr. Rhymer responded “It is an honor to be recognized, but my appreciation goes to the men and women that serve our Country.  The easy part is allowing and supporting folks like Robert Wootton.  Without their service to our country, we would not have the freedoms that we enjoy here in the United States of America.”