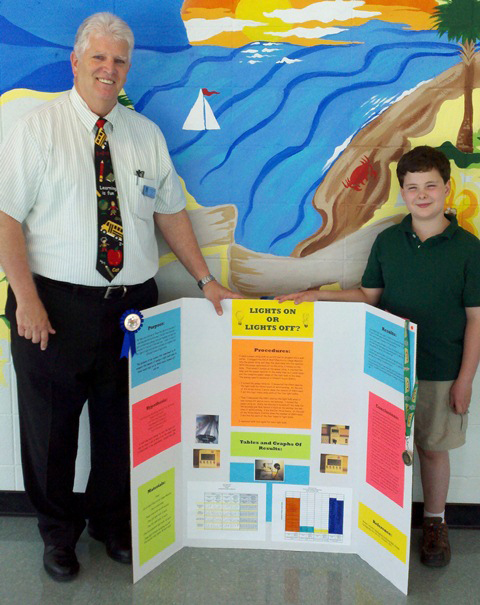 We have all heard the many ideas that people have about saving energy in reference to light use.

Employees in the Energy Management Department have requested that all staff and students follow the “Five Minute Rule,” i.e., turn off ALL lights in an area that will be unoccupied for more than five minutes.  Many have debated this request saying, “But I have always been told that it uses more energy to fire the lights back up.”

Well, the debate is OVER!

Trevor Benton, a fourth grade student at Bryson Elementary School has proven himself to be a true “myth buster.”  According to Trevor, his grandfather was one of those who believed that turning lights off and on used more energy.   Consequently, Trevor designed a science fair project that would determine the validity of this myth.

To begin his experiment, Trevor connected four different types of light bulbs to a watt meter.

Adopting his grandfather’s opinion as his hypothesis, Trevor assumed that each bulb (except the LED) would use more energy when turning them off and on, than when allowing the lights to burn steadily.

So, there you have it, as it turns out, it really DOES “pay” to turn off the lights if an area is unoccupied.