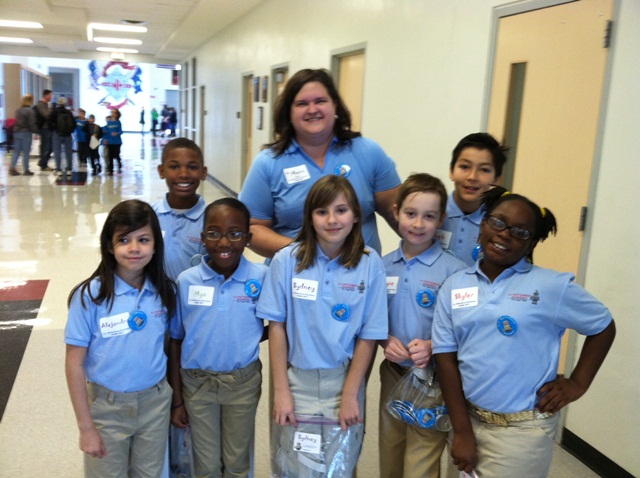 The 4th Grade Lego Robotics Team at A.J. Whittenberg Elementary School of Engineering is heading to Germany! The team has been invited to compete against 54 other teams from 38 countries at the Open European Championship (OEC) in Paderborn, Germany on May 7-10, 2013. The tournament is part of the First Lego League (FLL) initiative created by Dean Kamen. This is the first year of competition for the AJW Engineers.

A.J. Whittenberg Elementary is the only team from the state participating in the international event and one of only three teams from North America to be invited. The team, comprised of seven students from the fourth grade, will represent the U.S.A. and compete against teams from China, Brazil, India, Italy, Spain, Chile, Thailand and many other countries. The AJW team is expected to be the youngest team at this international tournament. The nine and just-turned 10-year-olds will compete head-to-head against students up to age 15.

As part of the competition, teams must design, build and program autonomous robots to complete specific tasks on a defined course. Additionally, the team must complete a research project and create an invention related to the FLL theme. This year’s theme was "Senior Solutions" – devising mobility solutions for senior citizens.

Generous support from business partners and the community made this trip possible for the West Greenville-based school. Fluor contributed matching funds to the fundraising effort, matching dollar-for-dollar all monies raised. NCEES was another major contributor. Additional donations were received from a host of private citizens, anonymous donors and collections by West Greenville area churches. Thanks to this outpouring of support, funding for the trip was raised in less than one week.

The AJW Lego Team leaves Monday, May 6 for the tournament in Germany. You can follow their progress and help cheer them on by "liking" their Facebook page "AJW Lego Robotics Team."