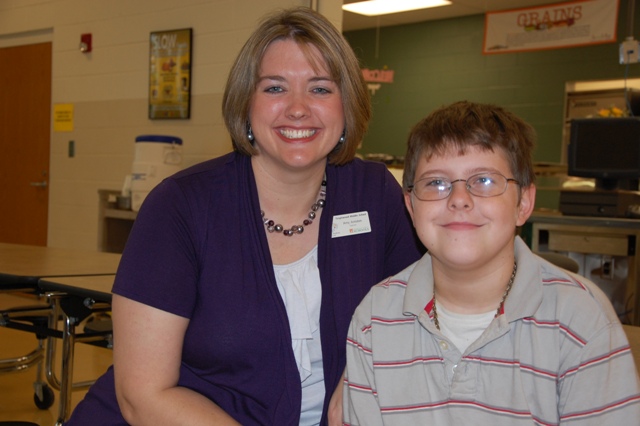 No one wants to find themselves in a situation that requires life-saving skills like CPR or abdominal thrusts, but many GCS employees are prepared to do just that in the event of an emergency. In mid-September, Amy Amidon, a sixth grade math teacher at Tanglewood Middle School, sprang into action when she noticed one of her students was choking during lunch.

“I said, ‘Are you choking?’ and he just nodded his head and put his hands near his throat,” said Ms. Amidon. “So I came to him and whipped him around and started abdominal thrusts. After about the fourth or fifth thrust, he coughed up a piece of a hotdog,” she said.

Sixth grader Alex Smith is grateful his teacher knew what to do.  Ms. Amidon said, “I was trained in CPR while I was in college and working for the Greenville County Disability and Special Needs Board. I get refresher training every year but I have never had to use it before. I’m just glad I was able to help Alex.”

Kori Adkins, First Aid/CPR and AED Nurse Coordinator for the district, conducts two training classes per month for new First Responders. She also conducts annual practice drills at every school and district facility. The drills include CPR and automated external defibrillator (AED) practice on a mannequin. Adkins conducts the drills in various locations around the school, including the playground, lunchroom, and car line, to simulate real-life situations.

“During the drills, I time how long it takes from notification of an incident to the time the first responder arrives,” she said. “It has been determined that if the first shock is delivered within three to five minutes of the incident, you have the best chance of saving the person’s life.”

Every GCS facility has an AED. State law requires that every location with an AED must also have a minimum of 10 First Responders on site who are trained in first aid, CPR and AED.  Ms. Adkins says many of the district’s First Responders have used their training to save lives at school, at home, and in the community. Here are a few examples: