Heroes behind the Wheel 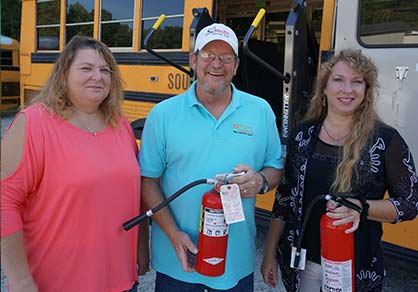 What started out as a field trip to the Children’s Museum for about 100 special needs students from Washington Center turned into an act of heroism by Melanie MacDonald, a special needs bus supervisor.

After dropping off the students, the drivers parked their buses back-to-back in a line on the side of the road. Melanie MacDonald, a special needs bus supervisor, noticed an unusual smell when she walked past one of the buses. Suddenly someone said they smelled smoke, and Melanie jumped into action.

"I knew immediately which bus it was,” she said. “I crawled under the bus to assess where the smoke was coming from, and I saw a flame.” Melanie is quick to acknowledge the support of two of her colleagues. Cathy Poole, a bus supervisor, started directing everyone to move their buses away. Melanie continued to douse the flame with a fire extinguisher, while John Weaver, the driver of the burning bus, ran to get a second extinguisher to keep the fire at bay.

“As a safety officer, I knew that as long as I kept the flame down, the fire was not going to spread," said Melanie. “It was an electrical fire. I kept dousing for about 15 minutes until the fire department arrived.”

Melanie’s act of heroism recently earned her the Hero of the Year Award from the South Carolina Association for Pupil Transportation.

Melanie has worked for the Transportation Department for 16 years as a special needs driver, a safety officer, and a trainer. She has been a supervisor for the past five years.

Even after five years, she enjoys going to the Special Olympics to see her former students. "I love it when they rush up to me and say 'Hey, Mrs. MacDonald!' They still remember who I am," she said. Melanie started driving so that she could work on the same schedule as her young children. The schedule is good, she said, especially if you have children in school. "You get the same days off and you don’t have to worry about day care. Bus drivers really love their jobs because they enjoy working with students and making a difference in their lives. There is no job out there that is as satisfying as driving a special needs school bus."