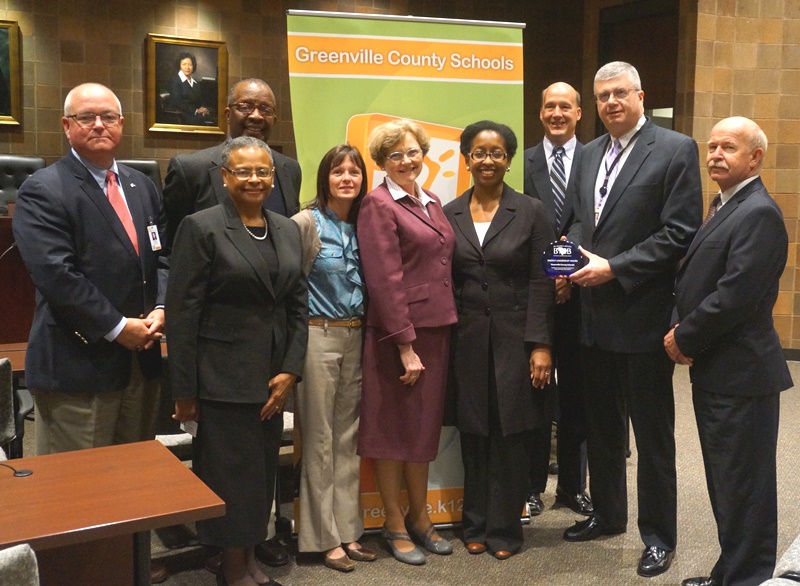 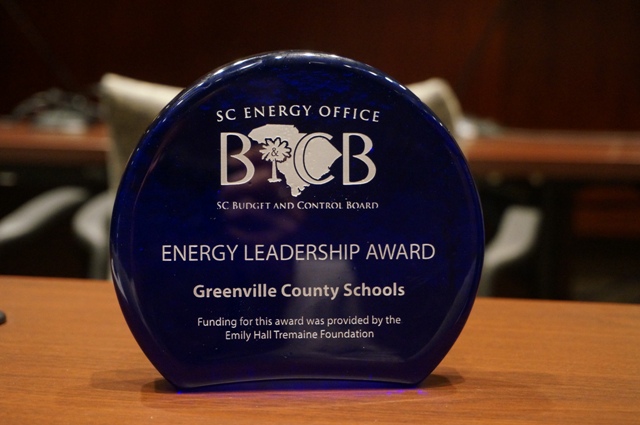 “This award is so special because it fits into many of the things that the Tremaine Foundation has very generously supported in South Carolina, both supporting and encouraging local government and supporting and encouraging school success stories,” said Trish Jerman. “This particular award focuses on the fact that Greenville County Schools has a solid, long-term commitment to find those no-cost changes, finding low-cost programmatic changes, offering ways the staff and students can use energy smarter, and the ongoing commitment to capital improvements.”

Nicole Chevalier added, “Greenville County Schools is the first school district to receive both the Milestone Award and the Municipal Leadership Award. You set an example for the state.”

Superintendent Burke Royster said, “Our efforts have included replacing equipment with more energy-efficient equipment, using technology to monitor and control our energy usage, and making human behavior changes to best utilize the resources that we have.

“We believe there are two primary reasons those are the things we need to do. First and foremost, that we are being good stewards of taxpayer investments, and secondly, that allows us to free up resources that more directly go to our core mission of educating students. With more than 3 million dollars in savings, especially during the economic downturn, we were able to keep some teachers in the classroom that we might otherwise not have been able to do,” Royster added.

Among the district’s initiatives is the Energy Star Rating from the Environmental Protection Agency, awarded to 41 schools. Other efforts include high efficiency lighting and lighting controls such as sensors and photocells, high efficiency HVAC equipment, and behavior modification including plug load reduction and energy awareness staff training.

A Strategic Plan was initiated to focus on energy savings opportunities that included a no-cost process improvement, low-cost programs, and capital investments. These processes and programs have become standard operating procedures, resulting in an energy ethic across the district. Energy Managers constantly communicate the need for smart use of resources. Students and staff are informed about current costs and goals through web-based training and reporting, and schools are rewarded each year for their energy-saving efforts.

Many of the GCS construction projects have been awarded recognition by the SC State Energy Office and ASHRAE, the American Society of Heating, Refrigerating and Air Conditioning Engineers. Construction standards require the use and implementation of the latest energy-efficient technologies.

About the Emily Hall Tremaine Foundation

Our Mission
The Emily Hall Tremaine Foundation will seek and fund innovative projects which advance solutions to basic and enduring problems. With an overall emphasis on education, principally in the United States, it will take an active role in three major areas:

Our efforts will reflect the entrepreneurial spirit of our family forbearers and the founder’s distinction for foresight, imagination and risk taking. We shall pursue our mission so that the Foundation will also engender family unity, equality, and mutual respect, and serve to educate family members in philanthropy, service and stewardship.