The 41st annual Salute to Education banquet, sponsored by Greenville Federal Credit Union and The Rotary Club of Greenville, was held last night at the TD Convention Center.

With more than 750 people in attendance, the awards ceremony recognized 48 Valedictorians and other honor students from Greenville County Schools’ 14 public high schools. Also recognized were staff who had earned state and national awards during the school year and the 2011-12 GCS Teachers of the Year.

During the event, three 2012 Students of the Year were named for their outstanding performance on the SAT or ACT college entrance test.

The Salute to Education banquet was hosted by WYFF-TV Meteorologist Dale Gilbert.

Students of the Year 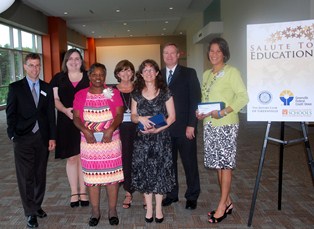 School Administrator of the Year

When students arrive each morning, Dr. Washington is there greeting them with a smile, hug, and words of encouragement. Dr. Washington makes time to present at district workshops and has welcomed representatives from schools inside and outside our district. She has served as a mentor to teachers at Brushy Creek Elementary who are aspiring principals. Dr. Washington uses data to improve student achievement levels to record highs and posts a Data Wall in the school to showcase student performance.

Assistant School Administrator of the Year

Dr. Cindy Alsip listens carefully, asks insightful questions, and responds immediately to each issue she faces. She empowers teachers and staff by encouraging them to be part of the decision-making process. Dr. Alsip takes great pride in her ability to organize and manage important data such as the school’s graduation rate and information for the school portfolio. Dr. Alsip led the development of an after-school tutorial program for students that includes bus transportation home. The program better prepares students to master course content and pass their courses.

School Support Employee of the Year

Kelly Adams has a rapport with students that is second to none. She can sense when a student needs help or just someone to talk to, and encourages and motivates reluctant learners and special education students. Mrs. Adams uses the Rosetta Stone program to improve her Spanish skills so she can better communicate with Hispanic students. She has created an engaging and inviting learning environment in the media center, and has developed a school literary magazine for students to showcase their writing.

Operations Employee of the Year

Jackie Gibson shows initiative by recognizing what needs to be done before being asked. During her 32 years at Berea Middle School, Mrs. Gibson has maintained a compassionate and caring demeanor among the staff and families. She has earned the respect of every teacher, student, co-worker, and faculty member, and has made a significant difference after becoming groundskeeper because she meticulously cleans, sweeps, mows, and even comes in on the weekends to ensure the school grounds are well maintained.

District Professional Employee of the Year

He has been described as “solid” with great customer service skills. Doug Chappell is an accountant with whom bookkeepers are ready to share their problems. He takes on additional responsibilities with enthusiasm and works many hours over his regular schedule to ensure that issues are accurately addressed. This year, he has been instrumental in the design and implementation of new processes for schools that allow them to receipt payments electronically. His positive, pleasant attitude is appreciated by those for whom he serves.

District Support Employee of the Year

Mrs. Woo models respect and professionalism in all that she does, and performs her responsibilities with polish, charm, and sincere consideration. Not only does this outstanding professional arrive at 7:30 a.m. to have coffee ready, but she is also the go-to specialist who takes extra time for anyone who needs assistance. Ramona uses her excellent communication skills and calm demeanor with parents, listening and understanding their problems. She is quick to ensure that the district has responded in a satisfactory manner on every issue she faces.