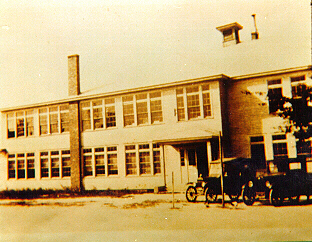 The history of Fork Shoals School dates back to the late 1800s. At that time, a school existed on the grounds of Fork Shoals Baptist Church. It was founded about 1877. The first building is believed to have been a little one room log cabin located between the church and the big rock.

Around 1886, a building was erected on a site directly south of the present Masonic Lodge. This building had a large room downstairs and one upstairs (the Masons used this upper story). About 1904, an ell was added on, making one large room and one smaller room.

About 1916, the school moved into a new building located on the site of the present Fork Shoals School. This building had two large classrooms downstairs and an auditorium upstairs. The school lunchroom in the section that was torn down in August of 1998.

In the meantime, citizens felt the need for a local high school.  In 1907, they organized the Fork Shoals High School. This operated as a private school. Men of the community put up money (bought stock) to finance the school, and tuition was set at $3.00 per month. A site was selected on a hill just east of the Reedy River, and construction of the school building began. For most of the first year of operations (1907-08), classes were held in the Fork Shoals Mill Chapel. Later in the year, when the new building was completed, the student body moved across the river.

The first graduating class was that of 1910 with 5 graduates. There was no graduating class in 1911 because the school was updated that year, and students had to attend an extra year to graduate. During that time, an eight room building was erected on the grounds west of the school to house the professor and his family and the female students who boarded Monday-Friday. This dormitory building is still standing today.

In 1917, with World War I in progress, the school closed, and the era of the Fork Shoals Private High School came to an end.

Some of the students returned to the Fork Shoals School (on the present site). All grades were taught here from first grade on up. The school grew from two teachers (in 1916-17) to four teachers in 1919-20. The auditorium, with a curtain across the middle, was used for two classrooms. Additional space was clearly needed. To accommodate this growing enrollment a fifth grade teacher was employed for the 1920-21 school year, and the buildings of the old private high school were reopened to provide space for the upper grades. The little school that began in a log cabin beside the church had grown into a five-teacher school operating at two locations. Concerned citizens were ever mindful of the educational needs of the community, and through dedication and determined effort, the school became a state high school in 1922. It was believed to be the second rural high school in the state to receive accreditation. Students even came from neighboring communities to attend this state high school.

Work began on an addition to the school building (on the present site). Around Thanksgiving of 1923, the new building was completed, and the upper grades from across the river moved in. There were ten classrooms and a large auditorium in the new building. The school operated in this building until the late 1930s.

In 1938, the school borrowed $7,500 in addition to federal funds that had been obtained, and three buildings were erected. At a total cost of $40,000, it was one of the most modern rural school systems of that day.

Consolidation of county schools began in 1951. The class of 1952 was the last to graduate from Fork Shoals High School. That fall, the school became an elementary school. Concern for quality education continued, and in 1970, the elementary school was accredited by the Southern Association and the State Department of Education.

A fire destroyed the middle section of school, the auditorium, in 1991. Then, in August 1998, a new facility was built just behind the location of the old school. The oldest section built in 1916 was torn down. One section still remains and has been renovated for use as a community center.

The elementary school has operated for more than 100 years without interruption, and a high school existed for 40 years. Fork Shoals School has a great heritage, and the citizens of this community are deserving of the congratulations of all rural communities.