Brushy Creek Elementary School has a long history of excellence in education, care and concern for students, and a strong involvement with the community.  The first Brushy Creek School building was built in 1916.  It was a four-room structure and stood across Brushy Creek Road from the present day building.  Early on, quiet fields and busy farms surrounded the school.  Across the street was Brushy Creek Baptist Church; distinguished for being the oldest church in Greenville County.  Up the road was the prosperous and progressive Silverleaf Dairy.

Brushy Creek’s first PTA was formed in 1956, with Mrs. Eugene Hammett (Dot) as the first PTA president.  Then, as today, the families of students at Brushy Creek were intent on securing the best education possible for their children.  Working closely with the school’s administration, the PTA bought school supplies, helped maintain the school grounds, repaired the school building, provided substitute teachers and held fundraisers.

During the late 1950’s and early 1960’s, the future of Brushy Creek School was uncertain.  At one point, the Greenville County School District decided to close the school and send the students to other schools.  But eventually, the plans evolved in favor of closing the small schoolhouse and building a new structure.  In the spring of 1964, the old schoolhouse that had served so well was abandoned and a new Brushy Creek structure was occupied in the fall of 1964.  It had 12 classrooms and was built to educate 124 students.  The first school year welcomed 486 students under the leadership of Helen Jordan and her staff.

The 1960’s and 1970’s also brought many changes to the community surrounding Brushy Creek.  During that time, many industries moved into Greenville, Greer and Taylors.  In less than 10 years, the area evolved from a rural community to a suburban one. 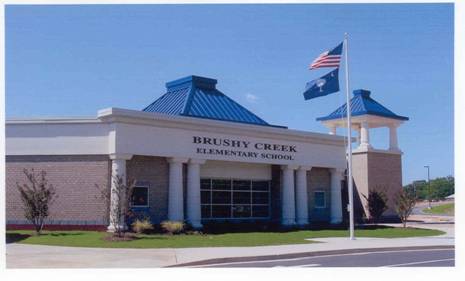 Beginning in the 1970’s, additions were made as needed, including a modular unit that consisted of 10 classrooms and 20 portable classrooms were added behind the 1964 building.  During the summer of 1999, Brushy Creek began construction on a second new school.  We moved into the new building in August, 2001.

Brushy Creek has always been among the top schools in the School District of Greenville County in academics and has won many awards.  In 1996, Brushy Creek was awarded the prestigious “Palmetto's Finest” honor.  The school also won the distinguished South Carolina Blue Ribbon award in 1998.   In 1999, the U. S. Department of Education recognized Brushy Creek as a national “Blue Ribbon” school.  Brushy Creek was given the “Red Carpet” award in 2001 for being a friendly school.   In 2003 Brushy Creek received the National PTA School of Excellence Award for Parental Involvement. In 2006, the Brushy Creek School Improvement Council (SIC) Honor Roll status for outstanding effort in building the foundation for an effective School Improvement Council.