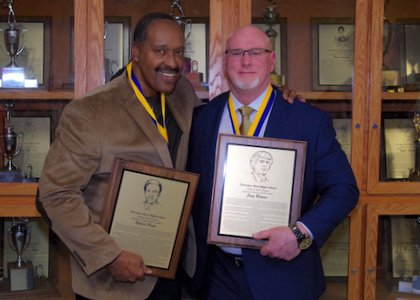 Photos from the 2020 Hall of Fame Induction Ceremony

Robert Poole and Joey Batson were inducted into the Travelers Rest High School Athletic Hall of Fame on Friday, January 31, 2020 in a ceremony held between the Devildog girls' and boys' basketball games against Greer High School.

Robert Poole is a 1971 graduate of Travelers Rest High School. In 1968, Robert chose to attend Travelers Rest High School forever changing the face of Devildog basketball and athletics. He played Junior Varsity basketball as a freshman and sophomore. As a Devildog sophomore in 1969, he led the Junior Varsity team to an undefeated season. As a Varsity player he earned 2 Varsity letters as a forward for the Devildog basketball team playing for Coach Joe Small. During the 1969-1970 season, he made Devildog athletic history by being the first African American student to ever start for a Varsity basketball team here at the high school.

As a junior during the 1969-1970 season, Robert was named the basketball team MVP while leading the Devildogs in scoring. Robert averaged 18.5 points per game. He helped lead the Devildogs to the 1970 Greenville County Invitational Tournament Crown as the Devildogs defeated Berea High School, 80-70. Robert led all scorers in the game with 26 points. He was also an All-Skyline Conference player and was an Honorable Mention in the Streets & Smith Yearbook.

During the 1970-1971 season, his senior year, Robert led his team to an undefeated regular season 21-0 record, while earning multiple individual honors and awards. Robert averaged over 25 points and 19 rebounds per game as a senior. He was named MVP of the 1971 team and was named an All-Conference, All-State and All-South performer. He was also named the "Top Shooter" in the State in 1971. It was quoted in the media during Robert’s senior season the following statement; "the 6-4 ½ senior forward handles the ball like a guard, rebounds like a center, plays defense like he invented it and shoots like he was born with a basketball in his hands". Robert gained the nickname, "The HUB in the Wheel". In the state playoff quarterfinal round in 1971 vs. York High School, Robert put on a "shooting exhibition" and seemed "unstoppable" as he scored a career high 36 points. He was also named a team captain for the All-Conference game. Robert was selected to play in the North/South High School All-Star basketball game and was an Honorable Mention All-American. He was named to the Orlando Sentinel All-Southern Team made up of the top 60 high school basketball players in the south.

Robert was recruited by several colleges and chose to attend Anderson College on a basketball scholarship where he played for the Trojans and graduated in 1973. He has also played Textile League basketball. Professionally, he has been selected "Staff Member of the Year" as a "paraeducator" in Special Education for Greenville County Schools.

Robert Poole is remembered at Travelers Rest High School as a ground-breaking leader, a talented and gifted Devildog basketball player, and an athlete with a great work ethic who paved the way and helped set the high standards for Devildog basketball.

In 1978, Joey was named the Greenville News Piedmont Player of the Week after a 22-0 upset victory over Woodmont High School. He had seven solo tackles and four assists including one for a safety. He also had two pass receptions for key first downs in the victory. Joey was named a 1977 and 1978 All-Conference performer. He was named to the 1977 All-State team as well as the 1978 All-Greenville County team. Joey also played basketball for the junior varsity Devildogs as a freshman and was a member of the Devildog track team in 1977 and 1978, when he participated in sprinting and throwing events.

Strength training and conditioning is another area in which Joey excelled. Joey made history in 1975 as part of the first group in the school’s history to be part of a formal weightlifting program. He went on to be one of the elite drug-free powerlifters in the nation, placing in the top five in national meets in California and Illinois. After graduation, Joey earned a scholarship to The Citadel, where he played football, and then transferred to Newberry College, where he was a two-year letterman and served as a co-captain his senior year. He is a 1985 graduate of Newberry College and later earned a Master’s degree from Clemson University in 1988.

Professionally, Joey chose a career in strength and conditioning while holding various positions at the collegiate level. He has been a graduate assistant, Assistant Director and Director of Strength & Conditioning at the highest levels including stints at Bowling Green, South Carolina, Furman and Clemson. He was named the 2009 National Strength Coach of the Year. Joey has invented and implemented innovative techniques and strategies that have made him one of the field’s preeminent leaders. In addition to earning numerous professional awards, he serves on the Board of Directors for the Collegiate Strength & Conditioning Association and holds its highest distinction as a Master Strength Coach. As Director of Football Strength, Speed & Conditioning, Joey has helped usher in an era of unprecedented success at Clemson, helping the Tigers to multiple ACC Championships as well as National Championships during the 2016 and 2018 seasons. At the conclusion of the decade of the 2010s, his strength program had helped produce 90 NFL Draft picks and helped Clemson players garner more than 190 All-ACC honors in his tenure.

Joey joins his dad, Billy Joe Batson, as the first father and son duo to be inducted into our Athletic Hall of Fame. Joey Batson is remembered at Travelers Rest High School as a very talented and gifted Devildog student-athlete who excelled in multiple sports with outstanding leadership qualities.