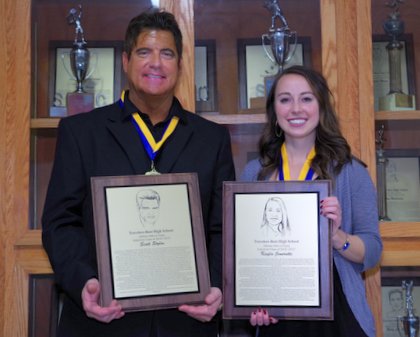 Photos from the 2019 Hall of Fame Induction Ceremony

Kayla Jenerette Holliday and Scott Styles were inducted into the Travelers Rest High School Athletic Hall of Fame on Friday, January 18, 2019 in a ceremony held between the Devildog girls and boys basketball games against Berea High School.

Kayla’s career statistic totals include scoring 1,584 points, while playing in 76 games; averaging 20.8 points per game; 3.3 assists per game while averaging 3 rebounds and 3 steals per game. Her career Devildog field goal shooting percentage is 56%.

After a stellar high school career, Kayla was named to the Greenville County All-Star Team, and the North/South All Star Team, where she also won the 3-point shooting title in singles and doubles and was invited to participate in the GA/SC All Star game. The capstone of her high school career was being named the prestigious "Gatorade High School Player of the Year" for South Carolina.

After graduation, Kayla attended Cedarville University where she played basketball and was named the freshman player of the year in 2011. Furthermore, she was named 1st Team All-Conference the following 3 seasons with 1 year being named the Conference Player of the Year. She earned team MVP honors on multiple occasions. She was an NCCAA All-American earning 1st Team honors in three consecutive seasons, as well as being named to the NCCAA All-Tournament team in 2012. Kayla was also an NCCAA Scholar Athlete Award recipient. She is ranked #5 in all-time scoring leaders at Cedarville with 1,825 points and is ranked #2 all-time in career three-pointers made with 268. She is a graduate of Cedarville University.

Scott Styles is a 1980 graduate of Travelers Rest High School. He was a three-sport standout athlete earning multiple Honors and Awards in football, basketball and track. He had a state record 24 career pass interceptions as a Defensive Back and was Selected to the Prestigious BLUE CHIP All AMERICAN TEAM that included future Heisman Trophy winner Herschel Walker.

In the 1977 season Styles Intercepted 12 passes. It was the second highest single season total ever in State Gridiron History. He also received multiple Upstate Player of the Week honors. Styles was a team Captain for the Devildogs in 1978 and 1979. He was also voted the Most Valuable Defensive Player in 1977, 1978 and 1979. Styles helped lead the 1977 Devildog football team to a Peach Blossom Conference II Championship, and into the 2nd round of the State Football Playoffs. The Devildogs finished the 1977 regular season with a 9-1 record while going 8-0 in Peach Blossom Conference II. This was the first playoff appearance for the Devildog football team since 1969. The Devildogs finished the 1977 season with an overall 10-2 record including a first-round playoff win over C.A. Johnson High School by a score of 34-20. Styles had a stellar performance with 3 interceptions and a fumble recovery for the Devildogs. Styles football career stats include 6 fumble recoveries, 4 punt returns for Touch Downs and multiple scores as an all-purpose player on offense; along with his 24 career pass interceptions.

Styles was also an All-Conference Basketball player. He was a team Captain for the 1980 Devildog basketball team. In the 1980 Peach Blossom Conference II Tournament, Styles scored 31 pts. in the Devildog victory over Greenville High School. He was named a Peach Blossom All-Conference Player after his senior season and was ranked 22nd in the State in scoring.

Track was the other sport that Scott excelled in while earning three Varsity letters in 1977, 1978 and 1979. He participated in the 440 yd. Dash and was a member of the 4x100 yd. Relay team that finished 3rd in the Peach Blossom Conference II standings in 1979.

Styles was a highly National sought-after recruit having offers from Clemson, South Carolina, Wake Forest and chose Furman University to continue his academic and athletic career. After a career ending injury in 1981, Scott transferred to the University of Georgia where he graduated in 1986.

Scott Styles is remembered at Travelers Rest High School as a very talented and gifted Devildog student athlete who excelled in multiple sports.