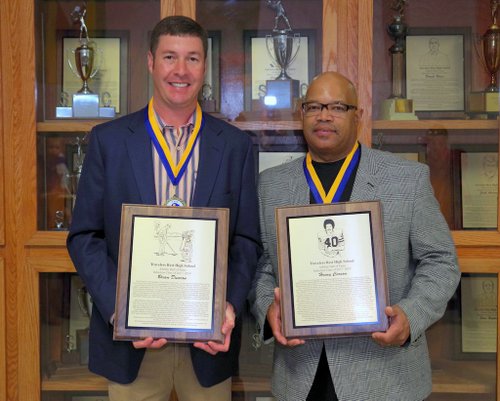 Photos from the 2018 Hall of Fame Induction Ceremony

Henry Carson and Brian Duncan were inducted into the Travelers Rest High School Athletic Hall of Fame on Friday, February 2, 2018 in a ceremony held between the Devildog girls and boys basketball games against Eastside High School.

Henry Carson is a 1978 graduate of Travelers Rest High School. He was a three-sport standout athlete earning multiple awards in football, basketball and baseball. In football, he earned 2 Varsity letters as a Running Back / Tailback for the Devildogs while playing for Coach Tom Stanford. In 1976, as a junior, Henry received the prestigious "Billy Joe Batson Memorial Award", named for the current Travelers Rest High School Athletic Hall of Fame member, and former TRYA coach and board member, the late Billy Joe Batson. This Award was presented by the Travelers Rest Youth Association recognizing the individual in our community who had contributed greatly to the advancement of youth in our area. During the 1977 football season, Henry's senior year, he earned many awards and accolades. He was selected the Greenville News Piedmont Player of the Week for September 5th - 10th. The Devildog's 2nd game of the 1977 season was against conference foe, JL Mann High School. Henry had a stellar performance as he rushed for 153 yards on just 11 carries, and caught a screen pass late in the game and raced 47 yards to set up a game winning touchdown a few plays later. The Devildogs scored two touchdowns in the 4th qtr. to defeat JL Mann 22-18. The Devildogs finished the 1977 regular season with a 9-1 record while going 8-0 in Conference play to earn a birth in the Class 3A Playoffs. This was the first playoff appearance for the Devildog football team since 1969. The Devildogs finished the 1977 season with an overall 10-2 record including a first-round playoff win over C.A. Johnson High School by a score of 34-20. Henry helped the Devildogs to dominate this game with his play, and he also scored one of the Devildog touchdowns in this playoff game. He was selected by his teammates as the Most Valuable Offensive Back after the 1977 season. Henry was also an All-Conference Selection while leading the Devildogs in rushing with over 1,300 yards in 1977. Several of Henry's Devildog teammates on this 1977 Conference Championship team have said he was a major factor in their 1977 success. Henry was also recognized for outstanding athletic performance, sportsmanship and contribution to team efforts.

After graduation, Henry attended Mars Hill College where he played football for two years. He is a graduate of Rutledge Business College. Henry has also served as a mentor and coach for the Travelers Rest Youth Association.

Henry Carson is remembered at Travelers Rest High School as a very talented and gifted Devildog athlete who excelled in multiple sports.

Brian Duncan is remembered at Travelers Rest High School as a talented, outstanding Devildog golfer who continued to help set the high standards of winning, consistent play, and leadership.