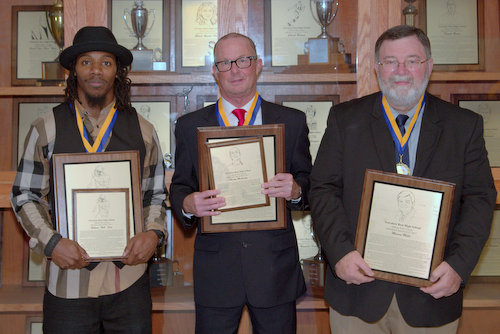 Photos from the 2017 Hall of Fame Induction Ceremony

Marvin Mills, Mickey McCauley and William "Will" Ford were inducted into the Travelers Rest High School Athletic Hall of Fame on Tuesday, January 31, 2017 in a ceremony held between the Devildog girls and boys basketball games against Blue Ridge High School.

Marvin Mills is a 1969 graduate of Travelers Rest High School. He was a four sport gifted athlete earning multiple Varsity letters and awards in football, basketball, baseball and track. In football he earned 3 Varsity letters while playing for Coach Dean "Chico" Bolin. Marvin was a two-time, All Skyline Conference and All Greenville County performer at offensive and defensive lineman. The Devildogs were Skyline Conference Champions in 1967 and 1968 and Marvin was known as "anchoring" the offensive and defensive lines. Marvin also earned the All Sports Sportsmanship Award as a sophomore. During his Senior season in 1968, Marvin was a team captain and was named the Most Valuable Lineman. Coach Bolin was quoted as saying, "Marvin Mills was the best pulling guard to ever play for me". He was also named to the North/South All Star Team as an offensive lineman after his senior season.

Marvin also played basketball for Coach Joe Small as a junior earning a Varsity letter. In 1967, Marvin acted as a PLAYER / COACH as a sophomore on the JV team due to an accident preventing the head coach from attending. The Devildogs won, earning Marvin the distinction of being the only STUDENT / ATHLETE in Devildog history to win a game as a coach. Track and Field was another sport where Marvin excelled. He earned 3 Varsity letters as a discus thrower and shot putter for the Devildogs.

Baseball was the sport where Marvin excelled as the Devildog catcher playing for Coach Joe Small. He earned 4 Varsity letters from 1966-1969 while having the distinction of never missing a game in his 4-year career. He was a two-time All Skyline Conference selection, was a team captain his Senior year, and was voted the Most Valuable Player.

Marvin was voted "Best All Around" as a senior and was President of the Fellowship of Christian Athletes. After graduation, Marvin was offered scholarships in both football and baseball from Furman University. He accepted the football scholarship. He was a 3-year letterman for the Paladins at offensive guard and was elected offensive captain as a senior. He is a 1973 graduate of Furman University.

Marvin is a consistent supporter of Devildog athletics having served the Travelers Rest Youth Association, and the varsity basketball team as a scorekeeper and assistant coach. Marvin Mills is remembered at Travelers Rest High School as a true representative of the spirit of the Travelers Rest community and a true example of what it means to be a Devildog.

Mickey McCauley is a 1975 graduate of Travelers Rest High School. He was a two sport standout athlete earning multiple Varsity letters and awards in football and track. In football he earned 2 Varsity letters as a sophomore and junior. He played multiple positions including Running Back and Defensive Back playing for Coach Roger Hayes and Coach Tom Stanford. Mickey was also the Devildog punter returner. On November 2, 1973, Mickey had a stellar performance in a Devildog win over then conference foe, McDuffie High School. Mickey scored 2 touchdowns, had a fumble recovery and return for 62 yards and an interception in the Devildogs 55-0 victory. His performance earned him the Greenville News/Piedmont Player of the Week honors.

Track was the sport where Mickey performed at a highly competitive level earning 4 Varsity letters while competing in multiple events. As a Senior during the 1974-1975 school year, he focused his concentration on track. In the spring of 1975 on May 10th, at the Greenville County Track & Field Championships, he set a record in the 880-yard dash with a run time of 1:56.6 which when converted to the current 800 meters is a time of 1:55.9. This is the longest unbroken record in the history of the Greenville County Track & Field Championships. At the South Carolina State Track Meet in 1975, Mickey became a State Champion by winning the 880-yard dash. He was a member of the 1975 South Carolina All-State Track team.

Mickey holds many professional awards. He has been a faculty member of the Furman institute of Running and Scientific Training (FIRST). He was also inducted into the USA TRACK & FIELD South Carolina Hall of Fame in October 2008. He is also a former President and Official for the Greenville Track Club.

Mickey McCauley is remembered at Travelers Rest High School as a gifted Devildog athlete who excelled in multiple sports.

William "Will" Ford is a 2005 graduate of Travelers Rest High School. He was a two sport standout athlete earning multiple Varsity letters and awards in football and track. In football he earned 4 Varsity letters as a Running Back / Tailback for the Devildogs. In 2001, Will was a Player of the Week for 1070 WSCZ, The Sports Zone, radio. In 2003, he earned several awards including, Greenville Touchdown Club Player of the Week, Fox Carolina Friday Night Blitz Player of the Week and also earned All-County honors. Will was also selected as the Best Offensive Back in 2003. In 2004, his senior year, he was once again selected as a Fox Carolina Player of the Week and was voted the Most Valuable Offensive Back. Will was also a Peach Blossom, Region II, 3A, All-Region selection in 2004. Will had the distinction of being named the Male Athlete of the Year for the 2004-2005 school year.

Track was the sport where Will also excelled earning 4 Varsity letters while competing in multiple events. In 2003, he was an All-Region selection in the 100m dash and was the Boys Track Sprinter MVP. Will was also named the Most Valuable Player in Boys Track in 2004 and 2005. In 2005, he also earned All-Region honors in the 100m dash and the 200m dash, won the Greenville County Division I 100 m dash, and was named the Greenville County Division I Most Valuable Track Athlete. At the 2005 South Carolina State Track Meet, Will won the State Championship in the 100m dash.

After an outstanding collegiate career, Will played professional football and went on to star in the Canadian Football League playing for the Toronto Argonauts, the Winnipeg Blue Bombers, and the Saskatchewan Roughriders. He was a 2013 CFL East Division All-Star. Will has also served as a mentor and assistant coach for the Devildogs.

Will Ford is remembered at Travelers Rest High School as a very skilled, multitalented and gifted Devildog athlete who excelled in multiple sports.