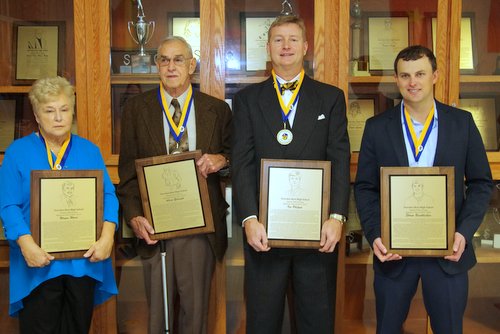 Photos from the 2016 Hall of Fame Induction Ceremony

Alvin Gilreath, Wayne Ward, Irv Philpot, and Shane Birckbichler were inducted into the Travelers Rest High School Athletic Hall of Fame on Friday, January 8, 2016 in a ceremony held between the Devildog girls' and boys' basketball games against Emerald High School.

Alvin Gilreath is a 1959 graduate of Travelers Rest High School. Al was an outstanding multiple sport athlete earning 16 total Varsity letters for the Devildogs in football, basketball, baseball, and track. He earned 4 Varsity letters in football as a halfback on offense and as a safety on the Devildog defense while playing for Coach Dean "Chico" Bolin. As a freshman on the 1955 Devildog football team, Al was voted the Most Valuable Substitute. He earned Player of the Week Awards in 1957 and 1958 his junior and senior seasons. Al also earned All-County honors during the 1957 and 1958 football seasons. After a stellar 1958 senior season, he was voted the Most Valuable Player for the Devildogs. Al was also a team captain for the Devildogs his senior year. Al was a member of the District 10 Conference Championship teams of 1957 and 1958. The Devildog football team of 1958 also had the distinction of being undefeated and playing in the South Carolina state football playoffs. Al scored 35 career touchdowns, kicked 47 PAT’s and kicked 1 field goal in his Devildog career. He was an Upstate North/South All Star and a Greenville County Rotary All Star as a senior.

In basketball Al played five years for the Devildogs beginning in the 8th grade and earned 4 Varsity letters while playing forward for Coach Joe Small. Al was also an outstanding baseball player for the Devildogs as four year starter at 3rd base and earned 4 Varsity letters. He was a member of the 1958 and 1959 District 10 Conference Championship baseball teams.

Track and Field was another sport where Al excelled earning 4 Varsity letters. He participated in multiple events including sprints, relays and the pole vault. The Devildogs were District 10 Conference Champions in Track and Field in 1956, 1957 and 1958. Al also helped the Devildogs make history as he ran one leg of the Devildog Half (1/2) Mile Relay team that won the State Championship at the 1956 South Carolina State Track Meet.

Al graduated from North Greenville Junior College in 1964 and is a veteran of the United States Army. He has also served the community as a youth basketball and football coach.

Al Gilreath is remembered as a gifted and talented multiple sport athlete who helped set the high standards for excellence here at Travelers Rest High School.

Wayne Ward is a 1964 graduate of Travelers Rest High School. Wayne was an outstanding talented, two sport athlete for the Devildogs earning Varsity letters in basketball, and track. In basketball, Wayne was exceptional and earned 4 Varsity letters as a standout for Coach Joe Small. He was a Skyline All-Conference performer in 1964. He was a key member of the 1963 and 1964 Devildog State Championship basketball teams while playing forward. The 1963 Devildog basketball team made history by winning the 1963 South Carolina Class 1A State Championship under the direction of Coach Paul Goebel with a 54-45 victory over Crescent High School. The Devildogs finished the season with an overall 22-1 record. Wayne also made the game winning free throw with only seconds remaining in the 1964 State Championship game to help the Devildogs again clinch the South Carolina State Championship with a 31-30 victory over Crescent High School while being coached by Joe Small. Wayne was named a member of the All-Tournament team. Wayne was also a team captain in 1964, his senior year. Wayne made Devildog athletic history in 1964 by being named a Coach & Athlete Magazine and a Royal Crown High School Basketball All-American while averaging 17 points per game. He is one of only two former Devildog players to be named a high school basketball All-American. Wayne also played Textile League basketball.

Wayne was also a standout Track and Field performer earning 4 Varsity letters while participating in multiple events. The Devildogs were Skyline Conference Champions in 1963. He was also a Skyline All-Conference Award winner in 1964.

Wayne was a decorated veteran of the Vietnam War earning the Bronze Star Medal with V for "Valor in Combat". He was a graduate of Southern Wesleyan University. Wayne passed away in January of 2014.

Wayne Ward is remembered at Travelers Rest High School as an outstanding student athlete and All-American whose efforts and abilities helped the Devildogs to win Conference and State Championships and to help establish our continued athletic traditions.

Irvin (Irv) H. Philpot III is a 1980 graduate of Travelers Rest High School. He was a two sport standout athlete earning multiple Varsity letters and awards in basketball and tennis. Irv played two years of junior varsity basketball for Coach Harvey Choplin. Irv earned Varsity letters in 1979 and 1980. As a junior he played dual positions as a shooting guard and forward. He was voted the Most Valuable Alternate as a junior. As a senior, Irv played every game as the starting Devildog point guard on the 1979-1980 team that finished 2nd in the conference for retiring Coach Joe Small.

Irv also excelled at tennis and as a freshman made Devildog athletic history as he was a founding member of the Devildog Men’s Tennis team during the 1976-1977 season playing for Coach Jerry Leach. Irv was voted the Most Valuable Player as a freshman as the Devildogs had a 3rd Place Conference finish in their inaugural year. The Devildogs won back to back Conference Championships in the 1978-79 and 1979-80 seasons with Irv playing #1 Singles and Doubles. The Devildogs finished 3rd in the 3A State Tournament during the 1978-1979 season and won the 1979-1980 3A State Tennis Championship in only their fourth year of existence. Irv was again voted the Most Valuable Player posting a 16-2 overall record.

In the summer of 1980, Irv played in the Palmetto Championships at Belton reaching the finals and thereby qualifying for the Southern Closed Championships which he competed in later that summer in Nashville, Tennessee. Irv competed in the SC State Closed Junior Tennis Tournament winning the Boys 18 Singles Championship and reaching the finals in Doubles. By the close of the 1980 tennis season Irv was ranked #3 in the State and #31 in the South in Boys 18 Singles.

After graduation, Irv accepted a scholarship to play Men’s Tennis at the College of Charleston where he was a four year starter and an All-Region performer. Irv won multiple Singles and Doubles victories over many notable collegiate players playing as high as #3 Singles and #1 Doubles. Irv’s consistent play helped the College of Charleston to compete in the National Championships in Kansas City, Missouri and become a Top 10 NAIA program.

After law school, Irv returned to his beloved Travelers Rest Community to serve as basketball coach and tennis coach and his favorite position as "water boy". Irv has challenged all the young men and young ladies he has worked with to be the very best they can be and to ask the question taught by his Saviour and Lord Jesus Christ – "What can I do to help?"

Irv Philpot is remembered at Travelers Rest High School as a ground breaking outstanding Devildog athlete who led by example as a player, coach and Devildog supporter.

Shane Birckbichler is a 2001 graduate of Travelers Rest High School. He was a talented two-sport athlete earning Varsity letters and awards in basketball and golf. In basketball, he was the starting point guard for the Devildogs in the 1999, 2000, and 2001 seasons. After a stellar senior season, he played in the Greenville Senior Showcase All Star Game.

After graduation, Shane received a golf scholarship to Furman University. He was a member of the 2004 Men’s Team that won the Southern Conference Golf Championship, where Shane led after the 1st round before finishing 6th. Shane earned a B.A. in Business Administration from Furman and an MBA from the University of South Carolina.