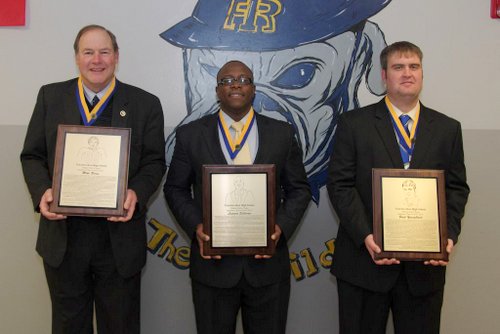 Photos from the 2015 Hall of Fame Induction Ceremony

Mike Burns, Lamont Sullivan and Brett Youngblood were inducted into the Travelers Rest High School Athletic Hall of Fame on Tuesday, January 27, 2015 in a ceremony held between the Devildog girls and boys basketball games against Greer High School.

Mike Burns is a 1970 graduate of Travelers Rest High School. He was an outstanding multiple sport athlete earning many varsity letters for the Devildogs in football, basketball, baseball, and track. Mike (#88) earned 2 Varsity letters in football as right end for Coach “Chico” Bolin and was a member of the three consecutive Skyline 2A Conference Championship teams of 1967, 1968 and 1969. During this three year period, the Devildogs, along with their three Conference Championships had two semifinal appearances in the state football playoffs while posting an impressive overall record of 29-4-2. This three year stretch is still one of the most successful periods in Devildog football history.

Mike was also a standout basketball player for the Devildogs earning 2 Varsity letters. He was a key part of the two Skyline 2A Conference Championship teams of 1969 and 1970 while playing center for Coach Joe Small. During the 1968-1969 school year, the Devildogs posted an 18-4 overall record, were also the Conference Tournament Champions and played in the 2A state playoffs. During the 1969-1970 season, the basketball team posted another impressive championship with an overall record of 20-3 and was also the Greenville County Invitational Champions. Mike was the leading rebounder for the Devildogs as a senior, scored 228 total points, and was named a team captain for the Devildogs. His outstanding play also earned him All-Conference selection honors as a senior.

Mike was also an outstanding baseball player for the Devildogs in 1968, 1969 and 1970 playing centerfield and earning 3 Varsity letters. He batted .333 as a senior.

Track and Field was another sport where Mike excelled earning 2 Varsity letters. He was an All-Conference and an All-State performer in 1970 as a member of the Devildog track team. Mike set the school record for the 440 yard dash with a time of 50.9 sec. and won the 440 yard dash at the 1970 South Carolina State Track Meet earning State Champion honors. He was also a member of the school record setting anchor-medley relay team posting a time of 49.5 sec. at the 1970 Greenville County Relays. He also competed in the broad jump, 100 yard dash and the anchor-mile relay. Mike was voted as a team captain and earned the Most Valuable Runner Award in 1970.

Mike Burns is remembered at Travelers Rest High School as a proven leader, a record setting athlete, and as a major contributor to our continued athletic traditions.

Lamont Sullivan is a 1994 graduate of Travelers Rest High School. He was a very talented, multiple sport athlete earning varsity letters in football, basketball, and track. In football, Lamont was a skilled running back for the Devildog football team earning 2 Varsity letters in 1992 and 1993 while playing for Coach Jack Anderson. As a senior on the 1993 Devildog football team, he was voted a team captain, Most Valuable Offensive Back, and was voted to the Greenville County Team of the Week.

In basketball, Lamont earned a Varsity letter as a senior and was a member of Coach Harvey Choplin’s Foothills 3A Region Championship team of 1994. Lamont was respected by his teammates for his work ethic and leadership in the classroom and on the court. As a result of his efforts, he received the Coaches Award for outstanding character and dedication in 1994.

Track and Field was another sport where Lamont’s ability and hard work excelled. He was a key member of the Devildog track team as a standout track performer earning 4 Varsity letters in his career while competing in multiple events. Lamont competed in the 400 meter, 4x400 relay, 4x100 relay, 300 meter intermediate hurdles, long jump, high jump and triple jump. As a senior track athlete in 1994, he was an All-Conference performer in the 4x100 relay, high jump and 300 hurdles. He also earned an All-County selection in the long jump, high jump and 300 hurdles as a senior. Lamont was also an Upper State Qualifier in the 4x100 relay, 300 meter intermediate hurdles, and high jump in 1994.

After graduation from Travelers Rest, Lamont attended North Greenville University where he played football as a wide receiver and defensive back. After a career ending injury in 1998, he was named a student assistant coach because of his leadership and character. He later was hired as an assistant football coach of wide receivers and special teams. Lamont earned his Associates, Bachelors and Masters Degrees all from North Greenville. Off the field he helped establish the NGU Athletic Ministries in 1999 and developed successful strategies to integrate the Athletic Ministries and the Fellowship of Christian Athletes programs into the dally life of the student athletes at North Greenville University.

Lamont Sullivan is remembered at Travelers Rest High School for not only his exceptional athletic abilities but also for his hard work and proven leadership.

Brett was a standout performer for the Devildog baseball team earning 3 Varsity letters playing for Coach Ric Smith. He made Devildog athletic history in 2000 and 2001 as he was named a Western 3A All-Region baseball player at two different positions in two different seasons. He was named an All-Region pitcher and an All-Region 1st baseman in two consecutive seasons. He also earned All-State honors as a senior in 2001 as a pitcher while posting a 10-3 record, and having an ERA of 1.95. Brett pitched 10 complete games, 3 shutouts, with having 70 strikeouts and 23 walks. He also batted over .400 while having 35 RBI’s. He was named Most Valuable Player for the Devildogs in 2000 and 2001. Brett was a key member of the 2001 Devildog District III Champions and was a member of the 2001 Upper State Baseball Champions as the Devildogs were also the State Runner-Up in 2001. He had 20 career wins as a pitcher with a 1.52 career ERA, and hit 14 career home runs. He played in the North/South All Star Baseball Game in 2001. Brett was widely recognized as the most dominant pitcher in Greenville County during his playing days at Travelers Rest High School. He also helped the Devildogs to the 2011 Region II baseball title as an assistant coach.

As a star Devildog basketball player while playing guard, Brett earned 3 Varsity letters. In 2001 he was a Western 3A All-Region performer, All-County performer, Greenville County East/West Senior Showcase All Star, and was named to the Greenville County Basketball Coaches Honor Roll for outstanding play in 2000 and 2001. As a senior in 2001, Brett averaged 13.3 points per game, while having 4.2 rebounds per game. He shot 32% from the 3 point arch, had a 44% field goal percentage and shot 81% from the free throw line. On Senior Night, 2001, Brett scored a career high 31 pts. including shooting 8 for 9 from the 3 point arch.

Brett Youngblood is remembered at Travelers Rest High School as an outstanding Devildog athlete who led by example with a great work ethic and an unmatched competitive spirit.