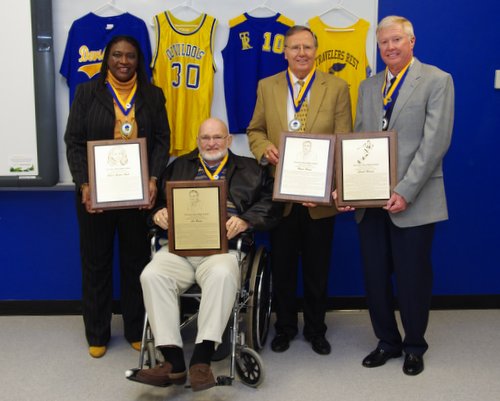 Photos from the 2014 Hall of Fame Induction Ceremony

In 1985, the Volleyball team under her direction won the Peach Blossom Conference Championship by posting an impressive 20-0 record. They followed that with hosting and winning the South Carolina 3A Upper State Championship later that year. In 1986, the Lady Devildogs Volleyball team made history by winning the South Carolina 3A State Championship. This was the first State Championship in history in any girls sport at Travelers Rest High School. The Lady Devildogs under Coach Gunter Shell's leadership posted an overall record of 29-8. Coach Gunter Shell’s "YOU CAN DO IT!" attitude and motto helped motivate the team and the hard work and determination paid off with bringing home a state championship to Travelers Rest High School. Coach Gunter Shell was quoted as saying "The most outstanding thing about this team was that everyone had to perform and contribute for us to be successful. We all played together when it counted most, in the state tournament."

Her teams also won multiple Conference and Region Championships in Volleyball and Girls Track, and she was personally named Region Coach of the Year four times. She coached several All-Region and State Champion players in Volleyball and Track. She was named a two-time North/South All-Star Volleyball Coach and was a member of the South Carolina High School League Executive Committee in Volleyball in 1986.

Coach Gloria Gunter Shell is remembered at Travelers Rest High School as a "ground-breaking" leader who led her teams to great successful seasons.

Lee Burns is a 1959 graduate of Travelers Rest High School. He was an outstanding multiple sport athlete for the Devildogs in football, basketball, baseball, track and golf. Lee earned 3 Varsity letters in football as a quarterback and defensive back for Coach "Chico" Bolin. He was a member of the Conference Championship teams of 1957 and 1958. The Devildog football team of 1958 also had the distinction of being undefeated and playing in the South Carolina state football playoffs. As a senior, he was selected to The Rotary Senior Bowl and the Greenville County All-Star Football Team.

In basketball Lee played 5 years from the 8th grade to the 12th grade and earned 4 Varsity letters. He was named a Kiwanis Greenville County All-Star as a senior in 1959.

Baseball was another sport where Lee had a major impact for the Devildogs. His exceptional baseball skills allowed him to earn 5 Varsity letters playing multiple positions. Lee played 2nd Base, Shortstop and Centerfield for the Devildogs and was a two-time Greenville County All-Star. He was a member of the Conference Championship teams of 1958 and 1959. He was also a team captain.

Lee was also an outstanding track performer earning 3 Varsity letters while competing in the discus, shot put and running one leg of the 440 yd. relay team that won the Greenville County Championship. Lee also earned a Varsity letter in golf in 1959 and competed in the South Carolina State Golf Tournament. He also played baseball for the Greer American Legion Championship teams of 1957 and 1958 and was named an American Legion All-Star in 1957. He also earned the Most Valuable Player Award in 1958.

Lee’s excellence in the classroom and on the baseball field allowed him to earn a baseball scholarship to the University of South Carolina. Lee was two-time letterman for the Gamecocks and is a member of the Block "C" Club.

He was also a two-term member of the Travelers Rest City Council. Lee helped establish the Travelers Rest Youth Association where he coached for 12 years and won 5 County Football Championships. He was voted "Best All Around" by the student body as a senior at Travelers Rest High School in 1959. He is a 1964 graduate of Furman University.

Lee Burns was a standout performer at Travelers Rest High School and is remembered for his leadership and great athletic talents and abilities.

Roger Hayes is a 1963 graduate of Travelers Rest High School. He was a very talented, multiple sport athlete earning many varsity letters in football, basketball, baseball and track. In football, Roger earned 4 Varsity letters. He was an All-Conference performer in 1962 while playing quarterback, linebacker, punter and kicker for Coach "Chico" Bolin. The Devildogs posted a 9-1 overall record that year. He was also named the Best Alternate as a freshman in 1959. He was named a team captain, Most Valuable Back, and the Most Valuable Player in 1962 and played in the North/South All-Star Football game in the summer of 1963.

Roger was also a star basketball player earning 4 Varsity letters as a forward for Coach Joe Small. He was voted the Best Alternate as a freshman. The 1963 Devildog basketball team made history by winning the 1963 South Carolina Class 1A State Championship under the direction of Coach Paul Goebel. The Devildogs finished the season with an overall 22-1 record. Roger was a team captain for the Devildogs and symbolized the team’s toughness and grit.

In baseball, Roger lettered 4 years as a first baseman and pitcher for the Devildogs. He was also a team captain his senior year and member of the 1963 Skyline Conference Baseball Champions.

Roger was also a standout track performer earning 3 Varsity letters while competing in the high jump, discus, 220 yd. dash and also ran one leg of the 880 yd. relay. The Devildogs were Skyline Conference Champions in track his senior year, 1963. Other awards earned were the John White Best Student Athlete Award and the Best Athlete in All Sports Award. He also played American Legion baseball.

Roger earned a football scholarship to Clemson University where he played quarterback and defensive back for the Tigers and graduated in 1968. After graduation from Clemson, Roger began a 30 year successful teaching and coaching career. He taught at Travelers Rest, Mauldin, Dorman, Lexington, Wade Hampton and Eastside High Schools. Personal awards include Region Coaching Staff of the Year in 1986, and Greenville County Coach of the Year in 1987. He was a North/South All-Star Football Game Assistant Coach in 2003. He received the prestigious Phil Clark Lifetime Achievement Award from the Greer Touchdown Club in 2007.

To quote Roger, "to me the most important award was my entire senior year. In 4 sports we won 49 out of 53 events and lost only 4 for the year which was a great accomplishment and team effort for the entire year."

Roger Hayes is remembered at Travelers Rest High School as being part of our great athletic tradition as a student athlete, coach and teacher.

As a Devildog basketball player, Chuck earned 4 Varsity letters and was an All Skyline Conference selection in 1964 and 1965 for Coach Joe Small. He was also voted as the Most Valuable Player in basketball in 1964 and 1965. Chuck made Devildog athletic history in 1964 by being named a High School Basketball All-American by Coach & Athlete Magazine. Other historic awards include playing on 2 South Carolina Class 1A State Championship basketball teams at Travelers Rest High School in 1963 and 1964. The 1963 team was coached by Paul Goebel. He was Co-Captain of the 1965 basketball team and was selected to play in the North/South All-Star Basketball Game in 1965.

Chuck also excelled in baseball earning 5 Varsity letters. He was the leading hitter for the Devildogs as an 8th grader in 1961 and as a sophomore in 1963 while batting 0.400. Chuck was a member of the 1963 Skyline Conference Baseball Champions. He played Shortstop and 3rd base and was an All Skyline Conference selection in 1964 and 1965. He has an overall career batting average of .422.

In track Chuck earned 4 Varsity letters while participating in the 440 yd. dash and all of the relay events. The Devildogs were Skyline Conference Champions in 1963 in track. He also earned All Skyline Conference honors in 1964 and 1965 and was voted the Most Valuable Runner in 1964.

Chuck’s excellence in the classroom and in athletics resulted in multiple scholarship offers in Football, Basketball and Track from several colleges and universities. He was offered and accepted a football scholarship from Clemson University. He played for the Tigers from 1965 to 1969 as a Defensive Back for Coach Frank Howard earning 3 Varsity letters. He was a member of 2 ACC Championship teams in 1966 and 1967. Chuck also earned the ACC Honor Roll Award for Outstanding Academic Achievement during athletic participation for the 1969-1970 collegiate school year. Chuck is a 1970 graduate of Clemson University.

Chuck passed away on March 21, 2018 at the age of 71. He is remembered at Travelers Rest High School as an outstanding student athlete and All-American whose efforts and abilities help establish our athletic traditions.