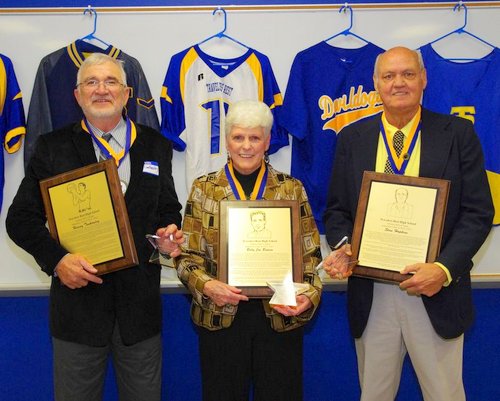 Photos from the 2013 Hall of Fame Induction Ceremony

Billy Joe Batson is a 1957 graduate of Travelers Rest High School. He was an outstanding three sport star in football, baseball and track earning many Varsity letters. He was a multiple winner of the Greenville County Player of the Week honors as a half back and defensive back for the Devildog football team. As a senior, he was selected to The Rotary Senior Bowl and the Greenville County All-Star Football Team. He was also a team captain and earned the Most Valuable Player award as a senior football player. Billy Joe scored over 250 pts. in his Devildog football career including scoring 41 rushing touchdowns as a half back in Coach “Chico” Bolin’s offense.

As a member of the Devildog track team, Billy Joe earned 2nd place honors in the 100 yard and 220 yard dash at the 1956 South Carolina High School State Track Meet. He also ran one leg of the Devildog half (½) mile relay team that won the 1956 State Championship. He was also the District 10 Conference Champion in the 100 yard and 220 yard dash both his junior and senior years here at Travelers Rest High School. He was also an outstanding member of the Devildog baseball teams of 1956 and 1957 as a right fielder.

Billy Joe was known as a “service oriented” individual and was actively involved with the Travelers Rest Youth Association from 1967-1974 where he coached and was a board member. He also served as a public servant by being a member of the Travelers Rest City Council for eight years. He was running for the office of Mayor of the City of Travelers Rest at the time of his death on October 26, 1977.

To those who knew him best, Billy Joe was a hard charging standout athlete who consistently played and excelled through injury and adversity to become a great Devildog athlete and citizen of the community. Billy Joe Batson is remembered at Travelers Rest High School as not only an exceptional athlete, but also as a man of great character and integrity. He was a true Devildog.

Harvey Tankersley is a 1960 graduate of Travelers Rest High School. He was an outstanding multiple sport athlete for the Devildogs in football, basketball, baseball and track. He earned 4 Varsity letters in football as a standout quarterback, linebacker, kicker and punt returner and was also the team captain in 1959, his senior year. In a 13-6 upset win over Carolina High School, Coach “Chico” Bolin described Harvey’s performance as “one of the best jobs of quarterbacking I think I’ve ever seen here”.

In basketball, Harvey was an All-Conference performer, Most Valuable Player and team captain for Coach Joe Small. After averaging 23 pts. per game in 1960, he made history on January 22, 1960 as he had a Devildog record high scoring performance in a game vs. Blue Ridge. Harvey scored 16 field goals and made 10 foul shots for a record high of 42 pts. in the Devildog 70-56 victory. He was selected to play in the 1960 North/South High School All-Star Basketball game and also played Southern Textile League Basketball.

In baseball Harvey earned 5 Varsity letters playing infield for the Devildogs and was named the Most Valuable Player and team captain his senior year. He also played Piedmont Textile League Baseball. He also was an outstanding track performer earning 4 Varsity letters while competing in multiple track and field events including the 100 and 220 yard dash, pole vault and relay events.

After high school he went on to a rewarding collegiate career at North Greenville College where he was a Junior College Most Valuable Conference Player, All-Conference, and an All-American performer in basketball. He is also a graduate of Wofford College where he was a star guard on the Wofford Terrier basketball team, and in baseball was the Most Valuable Player and team captain his senior year as an infielder.

As a college coach, Harvey coached at North Greenville College from 1964-1971 and was inducted into the North Greenville Hall of Fame in 1997. As a high school basketball coach, Harvey had a long and distinguished coaching career at Eastside High School from 1974-1999. His teams won numerous Conference and Region Championships and he was personally selected as the Coach of the Year multiple times. His career coaching record at Eastside was 522 wins and 307 losses. He is a member of the Eastside High School Athletic Hall of Fame.

Harvey Tankersley, “THE TANK”, was a superb player and coach and is remembered at Travelers Rest High School as a great athlete and competitor.

Stan Hopkins is a 1968 graduate of Travelers Rest High School. He was an outstanding multiple sport athlete earning many varsity letters in football, basketball, baseball and track. Stan was a two-way starter for Coach “Chico” Bolin in 1965, 1966 and 1967 in football. In 1967 Stan made Devildog athletic history by being the first Devildog football player ever to be named to the Shrine Bowl and was a starting Defensive End for the South Carolina team. He was also named to the North/South All-Star Football game in 1967. He was the Easley Touchdown Club SC State Lineman of the Year in 1967. Stan also earned All-Conference, All-County and All-State performer awards in football as a Tight End and Defensive End, and was a team captain for the Devildogs.

Stan was named a Travelers Rest Top Scholar Athlete. His excellence on the field and in the classroom allowed him to earn a football scholarship to Clemson University where he played for the Tiger football team from 1968-1972. He was also a member of the ACC Honor Roll.

After graduation from Clemson, Stan had an outstanding 35 yr. career as a high school educator, coach and administrator. He taught and coached at several Greenville County High Schools including Greenville, Mauldin and Eastside. He also served as the Athletic Director at Mauldin High School. Stan earned Greenville County Co-Coach of the Year honors in football in 1990 and was the Peach Blossom AAA Coach of the Year in wrestling in 1979, 1980 and 1981. He was also a board member of the South Carolina Association of Athletic Administrators from 1988-1996.

Stan Hopkins is remembered at Travelers Rest High School as a proven leader and for his many contributions and efforts to continue the tradition of athletic excellence.