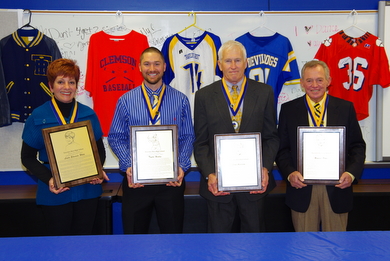 Photos from the 2012 Hall of Fame Induction Ceremony

Randall Poole is a 1951 graduate of Travelers Rest High School. He was a three sport star in football, basketball and baseball in the early era of Devildog athletics. As a member of Coach Dean "Chico" Bolin’s first football team in 1949, Randall was a standout tailback in the "single wing" formation offense. He also played linebacker on defense, and was the team punter. As a senior on the 1950 football team, he was the quarterback in the newly installed "split T" formation on offense and again played linebacker on defense. He was also selected as a team captain his senior year.

As a Devildog baseball player, he was a star shortstop and pitcher and led the team in batting average as a senior. He was also a team captain and was voted the Most Valuable Player on the 1951 baseball team, his senior year.

Randall was selected to make the "Toast to Guests and Trustees" at the first annual Travelers Rest High School Athletic Awards Banquet held on May 8, 1951. After graduation, he was awarded a General Excellence Scholarship to Furman University where he played basketball and baseball. His collegiate career was interrupted when he entered the military during the Korean War. After his military service, he returned home and was awarded a scholarship to Clemson College where he earned his degree in Textile Chemistry.

Randall passed away on April 13, 2012 at the age of 78. He is remembered as a pioneer at Travelers Rest High School who helped launch the Devildog athletic programs.

Linda Edwards White is a 1966 graduate of Travelers Rest High School. She was an outstanding basketball player for the Lady Devildogs and was also a cheerleader. She was a member of the Skyline Conference Championship basketball team of 1966 that played in the state playoffs that year. Linda was coached by Maxine Bishop and Joyce Stanford. She was named the Most Valuable Player her senior year.

Collegiately, she played volleyball and basketball for North Greenville Junior College earning the Most Valuable Player award in basketball. She was also named the overall Outstanding Freshman in 1967 for her athletic and student government contributions. She graduated in 1968. Linda furthered her education by earning her Bachelor’s degree from Winthrop College in 1970.

In 2003 she was named as South Carolina's Pathfinder Award winner for her contributions in athletics. In the media's 30-year review of Title IX, she was recognized as one of the 10 women who made an impact in South Carolina. Linda has significantly contributed to the culture change in women’s sports in South Carolina that has enabled young women to have great opportunities and enjoy the benefits of athletics.

She is a true example of what it means to be a Devildog.

Jack Anderson is a 1966 graduate of Travelers Rest High School. Jack was an outstanding multiple sport athlete earning many varsity letters in football, basketball, baseball and track. Jack was a four sport letterman during the 1964-1965, and the 1965-1966 school years. He earned the Most Valuable Player and All-Conference awards in all four sports during his high school career. He earned the Most Valuable Player award in baseball during the 1964-1965 school year. Jack made history during the 1965-1966 school year, as he earned the Most Valuable Player and All-Conference Player awards in all four sports in the same school year. Jack was also an All-State performer in track as a senior. He was selected as a player in the North/South All-Star football game in 1966 as a senior and also served as a coach in 1992. He was an Honorable Mention All-Southern Football selection in 1966.

After graduating from Travelers Rest, Jack went on to a rewarding career at Clemson University where he lettered in football, baseball and track. He played multiple positions for the Tiger football team and was the leading punter in the Atlantic Coast Conference in 1969 and 1970. Jack was selected to play in the Blue/Gray All Star football game in Montgomery, Alabama in 1970.

After graduation from Clemson, Jack began his long coaching career by working as a Graduate Assistant at Clemson. He then taught and coached various sports at Westside and Walhalla High Schools. He was an assistant coach and then head football coach and Athletic Director at Walhalla High School. He served 5 years as an assistant and 13 years as head football coach here at Travelers Rest. In football he was named co-Greenville County Coach of the Year in 1990 and was named region Coach of the Year in track in 1990. He was a multiple winner of the region Coach of the Year honors in 1999, 2000, and 2001 in boy’s golf. Jack had the distinction of coaching the 2001 Travelers Rest High School boys’ golf team to the 2001 State Championship.

Jack has always been known as a great ambassador for our school traditions and the Travelers Rest community as a whole. He helped set the example for excellence in athletics.

Taylor Harbin is a 2004 graduate of Travelers Rest High School. He was an outstanding baseball player earning five Varsity letters in his career. He was also a multiple winner of awards and honors, including All-Region, Western 3A Player of the Year, All-County, All-State, Most Valuable Player and was a member of the 2001 3A Upper State Champions. He finished his Devildog career with a .488 batting average. Taylor holds the South Carolina high school state record for career home runs with 52. In 2003 he was voted the Most Valuable Player in the National Wooden Bat Tournament, and was the Travelers Rest High School nominee for the Wendy’s High School Heisman Award. As a senior, he was selected as the male Athlete of the Year for the 2003-2004 school year and was named Mr. Baseball for the state of South Carolina in 2004. He was also a member of the 2003 and 2004 Big League World Series Championship teams.

After graduation, Taylor attended Clemson University. He was recognized as one of the most "heralded freshman" in Clemson baseball history. He was an All-ACC and All-American performer while at Clemson. He was the first freshman in Clemson history to be named to the All-American team. In 2005 he broke a Clemson record that had lasted nearly 43 years by having 16 total bases in a game at NC State. Taylor hit two three-run home runs and a solo shot which helped him earn ACC Player of the Week honors. In 2006 he was a member of the Clemson baseball team that played in the College World Series. He was selected as the team "co-captain" in 2007. His career statistics at Clemson are: .320 all time batting average, while hitting 68 doubles, 7 triples, 30 home runs and having 172 RBI’s.

Taylor is remembered as a true champion who set the standard for excellence in baseball at Travelers Rest High School.


Back to Main Hall of Fame Page