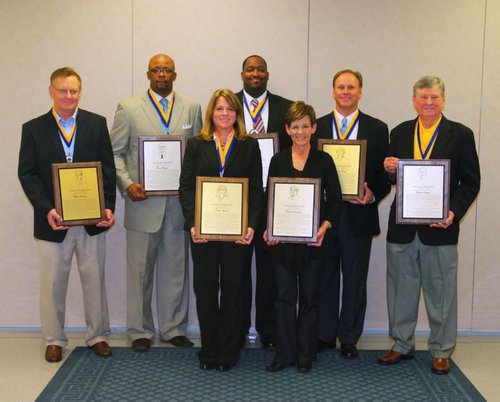 Photos from the 2011 Hall of Fame Induction Ceremony

Ricco Booker is a 1994 graduate of Travelers Rest High School. He excelled in basketball and baseball. Ricco was All Region in varsity basketball in 1992, 1993 and 1994. He was also All State in basketball in 1993 and 1994. In 1992 he was selected to play in the Greenville County Christmas Tournament and in 1994 he played in both the North/South All Star Basketball Game and the Big Mac Classic where he was on the All Tournament teams. Among his noted basketball achievements are, Most Valuable Player in 1993 and 1994, Foothills AAA Region Championship team in 1994, 3A State Basketball Player of the Year for 1994. He earned three varsity letters in basketball and scored over 1,000 pts. in his career. He was an Honorable Mention McDonald’s All American in 1994 and received recognition from the community and the City of Travelers Rest following his selection as 3A State Player of the Year in 1994.

Ricco’s baseball accomplishments include earning five varsity letters. In 1994 he was named to the All Region team and played in the North/South All Star Baseball Game. He was also a Major League Baseball prospect. Ricco was the Male Athlete of the Year for the 1993-1994 school year.

At the collegiate level Ricco excelled in basketball. He earned numerous awards in college including All Region, All American, and Best All Around Player at Southern Wesleyan University. He also scored over 1,000 pts. in his collegiate career.

Ricco played one year of professional basketball in Dublin, Ireland. He has also been an Assistant Varsity basketball and Head JV baseball coach here at the high school. In 2005 he made history by implementing and coaching the first ever Varsity Girls Golf team here at Travelers Rest High School.

Ricco will long be remembered for his many achievements.

Daniel Bruce is a 1995 graduate of Travelers High School where he excelled in football, basketball, soccer and track. He earned varsity letters in all four sports from 1993-1995. Daniel was the 1994-1995 Male Athlete of the Year.

During the 1993-1994 school year, Daniel earned All Region awards in basketball and track. He was also awarded the Best Rebound award in basketball and was a member of the Foothills AAA Region Championship team.

After high school, Daniel played collegiately at Wingate University on a football and basketball athletic scholarship. He played quarterback for four years and among his many football awards were the South Atlantic Offensive Player of the Week Award, the 1999 SAC Total Offensive Yards Award and was also selected as a team captain. In basketball, he earned numerous awards including, being selected as a team captain, earning the Coaches Award, and the Athletic Leadership Award. He was member of the two time South Atlantic Conference Basketball Champions while at Wingate.

Daniel is remembered for his many contributions to Travelers Rest High School.

David Farnham will always be remembered as a great athlete and coach. He graduated from Travelers Rest High School in 1968. He was a star football player from 1963-1967 for legendary Coach Dean "Chico" Bolin. David also a played basketball for the Devildogs from 1964-1967 and was a member of the track team from 1966-1967. He was co-captain of the football and basketball teams and earned many Varsity letters during his athletic career. David was also deeply involved with the Fellowship of Christian Athletes his entire life.

After a rewarding high school career, David was offered and accepted a full Athletic Scholarship from Clemson University to play football. He was a member of the Tiger football team from 1968-1971. He was the starting center in 1970 and 1971. While at Clemson, David earned multiple awards including the Lowndes P. Shingler Award for Sportsmanship in 1970 and 1971. He was also a member of the All State College Team in 1971 and was an ACC Scholar Athlete in 1970 and 1971. David began his long coaching career while working on his Master’s Degree by coaching the Clemson Freshman football team in 1972.

David’s long and storied high school teaching, coaching and administrative career covered many sports and high schools. David coached at Westminster, Palmetto, Travelers Rest, Carolina, Wade Hampton, Riverside, Greer and Blue Ridge High Schools. He was selected as the 2007 Shrine Bowl Head Coach, the 2007 Greenville Touchdown Club Coach of the Year and was the 1st recipient of the FCA Coaches of Influence Award in 2007.

David passed away on November 28, 2007 at the age of 57. The success of a coach is often measured by his wins and losses. David left each school he coached at with more wins than their previous years, but his success can best be measured by the many lives he touched and influenced.

Jennie Lyerly is a 1978 graduate of Travelers Rest High School. She earned four varsity letters in her basketball career and also lettered in track. Other awards earned were being named to the All Conference and All State basketball teams in 1976, 1977, and 1978. She was the Most Valuable Player on the Girls Varsity basketball team her sophomore, junior and senior seasons. Jennie led the Upstate in scoring her senior year averaging 21.4 pts. per game. She was a multiple winner of the Greenville News Player of the Week Award and scored over 1,100 pts. in her high school basketball career. In track, Jennie was a top miler and also threw the shot put.

After high school she attended Clemson University. She was part of the 1981-1982 Atlantic Coast Conference Women’s Championship team. Jennie led the Tigers in assists with 182 while averaging 5.7 pts. per game. She is ranked 5th All Time at Clemson in season assists. She also holds the Clemson record for tournament assists. Other awards earned while at Clemson were the Hustle Award in 1981 and 1982 and the Playmaker Award in 1982. She played in Clemson’s first appearance in the NCAA Women’s Basketball Tournament vs. Penn State in 1982.

Jennie became an educator and coach after graduation from Clemson having coached various girls tennis, softball, and basketball teams at Greer and Dutch Fork High Schools. Her teams have won multiple Conference Championships and she has personally been awarded Coach of the Year Awards in Softball and Basketball.

Jennie is remembered as a champion who help set the standard for excellence in athletics at Travelers Rest High School.

Mike Phillips is an outstanding Devildog athlete having graduated in 1970. Mike was a four sport letterman in 1967, 1968 and 1969 in football, basketball, baseball and track. Football accomplishments include being a 3 yr., two-way starter playing quarterback and safety. Mike earned many football awards including All Conference in 1967, 1968, 1969, All State in 1969, Runner-Up South Carolina Back of the Year in 1969 and was a member of the 1969 Shrine Bowl team. He is one of only two Devildog football players in history to have been named to the Shrine Bowl. In 1969, he was voted the football team captain, Most Valuable Back and Most Valuable Offensive Player. Individual career statistics include scoring over 400 pts., including throwing 42 touchdown passes, scoring 29 rushing touchdowns, scoring 5 rushing 2 pt. conversions and having 20 interceptions on defense. As the starting quarterback, Mike helped lead his team to three Conference Championships and two semifinal appearances in the state football playoffs with an overall record of 29-4-2. Mike was a multiple winner of the Greenville News Player of the Week Award. He was also known as an outstanding basketball, baseball and track athlete. He was named a Palmetto Boys State Representative in 1970.

Mike is a graduate of the University of South Carolina. He is remembered as a true Devildog Athlete who proved that his abilities and determination could overcome adversity and help lead his teams to victories.

Dillard Pruitt is a 1980 graduate of Travelers Rest High School. While known for his excellence in golf, Dillard also played basketball earning two Varsity letters. Golf is the sport that is Dillard’s passion and it shows in his great ability. He earned four Varsity letters in golf, he was a four year Most Valuable Player on the golf team and was a three year All Conference selection. These abilities allowed him to continue his golf at the collegiate and professional levels.

After graduation, Dillard attended Clemson University on a golf scholarship. Dillard was a distinguished member of the golf team and a three time All ACC player, the first Clemson golfer in history to earn that award in three different seasons. He was also named a two time All American, the first two time All American in Clemson history. He was a four year starter and led Clemson to a #5 National finish in his junior year, the highest in school history at that time. He was a key member of Clemson’s 1982 ACC Championship Team. Dillard played in three NCAA Tournaments including a 13th place finish in 1984.

Dillard played professional golf on the PGA tour for seven years having won The Chattanooga Classic in 1991. He played in the Masters twice, including a 13th place finish in 1992.

Dillard is remembered at Travelers Rest High School as setting the standard for golf excellence.

Roland Styles is a 1953 graduate of Travelers Rest High School. Roland was a member of the early teams of legendary coach Dean "Chico" Bolin. During these early days, statistics were rarely recorded and awards were rarely given out to players. Roland lettered in football, basketball and baseball from 1950-1953. He was a two-way starter in football, playing fullback on offense and linebacker on defense. Roland greatly contributed to the undefeated regular seasons of 1951 and 1952 and their participation in the District 10 playoffs. While playing fullback, Roland was voted as the "Best Blocker" during both seasons. He was also co-captain of the football team as a senior.

Roland was also a standout in basketball at the forward position and also was a team captain. In a game vs. West Gantt, Roland scored 26 pts., and while no official records had been kept, Coach Bolin said it was the most ever scored by a Travelers Rest player up to that time.

Baseball was another sport where Roland excelled. He was the catcher on the baseball team and was a captain his senior year. The Devildogs were undefeated in the regular season in baseball in 1951 and 1952 and made the District 10 playoffs.

The winning teams of the early 1950’s established Coach Bolin as a standout coach and laid the ground work for the athletic program. Roland contributed to this success and was voted "Most Athletic" by the student body his senior year.

After high school, Roland entered the United States Army where he played football in 1955 for the US Army SACOM Commanders located in Munich, Germany. This team was mostly comprised of soldiers who had previous collegiate playing experience including one All American from Michigan. Roland was a starting linebacker for this team.

Roland has enjoyed a successful business career and was a lifelong dear friend to Coach Bolin. He is remembered as one of the first Devildogs to have a great influence on our athletic programs.


Back to Main Hall of Fame Page