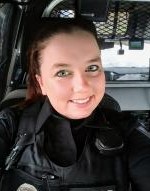 Officer Eskew graduated from Berea High in 2007. She then obtained an associate's degree in Criminal Justice in 2011 from Greenville Tech. She started her law enforcement career in February of 2012 working for Easley Police. SRO Eskew then worked for Liberty Police from 2013 until 2016.  During her time there, she worked in road patrol as well as an SRO for Liberty Middle School. She followed in her family's footsteps in public service (her Father was a fire chief for 30 years, both of her brothers work for Greenville City FD, and several other members are in public service in some form or fashion). SRO Eskew is currently working on a bachelor's degree in psychology from Columbia Southern University. She plans on continuing her education afterward to obtain a Master's degree in psychology. The reason she became an SRO was that she loves kids. SRO Eskew knows they are the future of our community. She wants to show the kids that in being an SRO she can be there for them through the good and the bad. As an SRO, she has used the knowledge she has learned to provide kids with information to keep them safe as far as cyber crimes, sexual predators, and scams. SRO Eskew hopes to one day use what she has learned in law enforcement, education, and the training she received to pursue a career in crimes against children (abuse, sex crimes, and neglect).