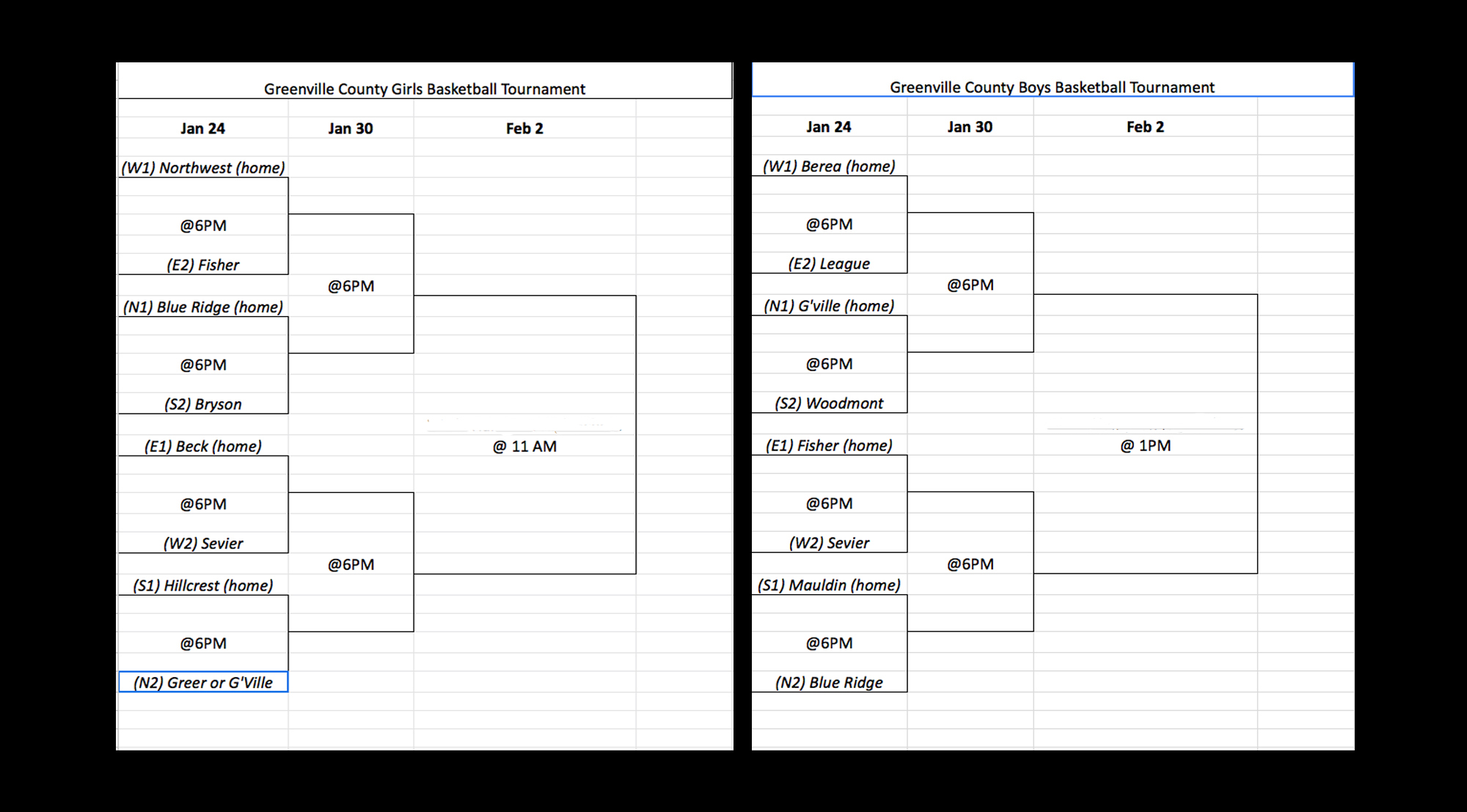 It came down to the last day of the regular season, but the 2019 GCS MIddle School Basketball Tournament is set.  The Greenville Middle Academy girls needed a win in their regular season finale to finish the season tied with Greer Middle for the final playoff spot.  The Lady Rams took care of business and Greer and Greenville finished with identical  7-3 records.  Both went 5-3 in division play and each won their home division game vs the other.  Following Greenville's victory over Tanglewood, the Rams won a coin toss for the 8th and final playoff spot.  Greenville will travel to Hillcrest on January 24th to open the 2019 playoffs.  Hillcrest cruised to the South Division title, finishing 9-0 overall and 8-0 in division play.  The Lady Wildcats made it to the title game last season before finishing as runners-up.

The Blue Ridge girls are two-time defending county champs and knocked off Hillcrest last year in the championship game.  The Lady Tigers are again a threat to win it all as they enter with a perfect 8-0 division mark and are unbeaten this season.  Blue Ridge will open at home vs the South Division runner-up Bryson Middle.  The Lady Bulldogs are 8-2 on the season with both losses coming to Hillcrest Middle.  Bryson hasn't lost since December 10th.

East Division champs, Beck Academy, enter with a 6-3 overall record and the Blue Knights went 6-1 in division play.  They will host the Sevier Falcons, who finished the season 7-3 and went 6-2 in division play.  Sevier's only losses in division were to Northwest Middle, who went 9-2 and 7-1 to win the West Division.  The Lady Panthers will host Fisher Middle (8-3, 4-2) on Thursday night.

The winner of Beck/Sevier will face the winner of Hillcrest/Greenville in one semi-final on January 30th.  The other semi will feature the winner of Northwest/Fisher and Blue Ridge/Bryson.  The championship game will be played at Riverside High on February 2nd at 11:00 am.

In the boys bracket, Berea Middle won the West Division with an 8-0 record in division and the Bulldogs went 9-1 overall.  That one loss was to League Academy on December 6th.  Berea will get their shot at revenge as the Bulldogs will host League (6-4, 4-2) to open the 2019 playoffs on January 24th.

Last years champions, the Mauldin Mustangs, are back and in position to make another run at the crown.  The Mustangs went 9-1 this season and 8-0 to win the South Division.  Mauldin will host Blue Ridge.  The Tigers finished second in the North, going 6-3 and 5-3 in division play.  Blue Ridge finished second to Greenville Middle Academy.  The Rams opened the season with a loss at Berea, but won 10 straight and went 8-0 to win the North Division.  Greenville will host Woodmont in the opening round.  The Wildcats went 7-3 and 5-3 in division play to finish second in the South.

East Division champion Fisher Middle will host Sevier.  The Firebirds went 9-2 overall and 6-0 in division play.  Sevier finished the season at 8-2, both losses being in division to Berea.

The winner of Fisher/Sevier will face the winner of Mauldin/Blue Ridge in one semi-final.  The other semi will feature the winner of Berea/League vs the winner of Greenville/Woodmont.  The semi-finals will be held on January 30th.  The championship will follow the girls title game on Saturday, February 2nd at 1:00 pm.

Tip-offs for all quarterfinal matchups are scheduled for 6:00 PM on Thursday, January 24th.  Semi-finals will be determined by highest remaining seeds and played on January 30th.  The championship games will be played at Riverside High on February 2nd starting at 11:00 am for the girls and 1:00 pm for the boys.