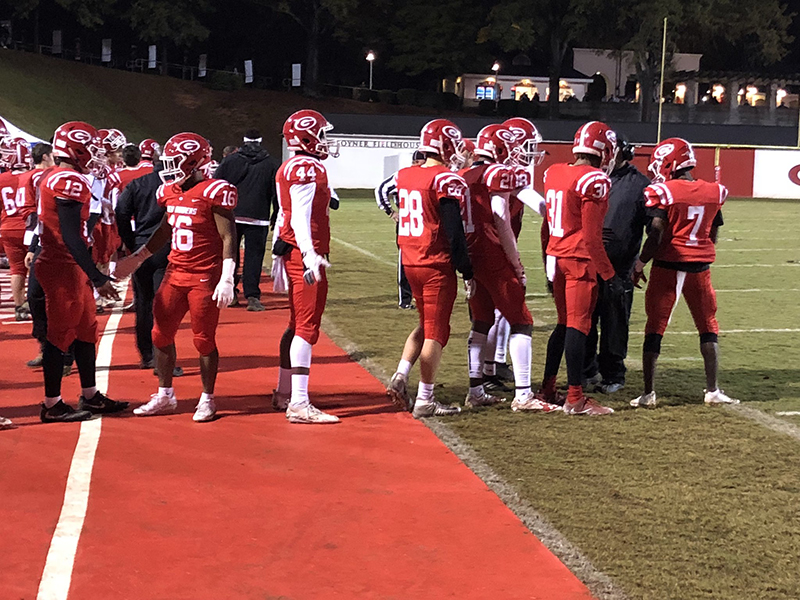 Greer opened the 2018 playoffs as one of the favorites in Class AAAA.  First up for the Yellow Jackets was the Pickens Blue Flame.  Greer and Pickens started playing in 1931 and Friday was the 22nd meeting between the two programs.  Greer has dominated the series 18-3 and Friday night was no different as the top seeded Jackets hosted the 4-seed Blue Flame.  Pickens tried to catch Greer with a surprise onside kick, but the attempt did not go 10-yards and Greer scored quickly on a 7-yd run by QB Matthew Huff.  After DT Quack Cohen came up with a Pickens fumble, Dre Williams pushed the lead to 14 with a 17-yd TD run.  Pickens wing offense managed to shew up a lot of clock, but the Jackets defense held them in check and big plays like Dre Williams 54-yd TD put the Jackets up 20-0 and Matthew Huff added a late score as Greer built a 28-0 lead after the 1st quarter.  Pickens threatened early in the 2nd quarter, but Greer's Ethan Alexander blocked the Blue Flame field goal attempt.  Greer went to the half up 28-0 and cruised through the 2nd half for the 35-6 victory.  Greer (10-1) will host York (6-4) in round 2 of the 4A playoffs.  The Cougars knocked out Orangeburg-Wilkinson 49-24 in the opening round.

While Greer was expected to be a contender in Class 4A, in Class 3A the Southside Tigers have surprised some teams on their way to a 7-3 regular season under first year head coach Jeremy West.  The Tigers have the areas leading rusher in Brayden Bennett and Georgia Tech commit Jalon Calhoun, a big play threat anywhere on the field.  Southside earned the #2-seed out of Region II-3A and hosted Newberry to open the 2018 playoffs.  It was all Tigers early as Bennett pounded the Bulldog defense and Southside built up a 22-8 lead after one quarter of play.  In the 2nd quarter, the Tigers erupted for 20 points in under five minutes to grab a commanding 42-10 lead at the break.  With the Bulldogs focused on the ground game, QB Jaime Gamble went over the top for a pair of scores as the Tigers cruised to the 2nd round 48-16.  Southside (8-3) will travel to Pendleton (9-2) on Friday.

While Greer and Southside live to play another week, four GCS teams saw their seasons come to an end.  On Thursday night, Eastside fell to Daniel 49-20.  It looked to be a shootout early as Daniel went right down the field and scored on a Tyler Venables run.  Eastside answered on their second play as Conrad Dawson found Armani Elmore for a 56-yd TD, but the Eagles missed the PAT and trailed 7-6.  It was all Daniel after that as Venables added three more TD runs in the quarter for a 28-6 lead.  A sloppy 2nd quarter featured turnovers, fumbled snaps, rain and a blocked punt as both offenses struggled.  Venables lead a scoring drive to open and close the quarter as the Lions built up a 42-6 lead at the half.  Max Louris opened the 2nd half with a 57-yd TD run on the Eagles first play of the half, but Eastside was never able to threaten as they fell 49-20 and end their season 7-4.

Greenville hosted Wren in one of the most anticipated matchups of the opening round.  It was a marquee QB matchup as Greenville's Davis Beville battled Wren's Tyrell Jackson.  Beville is a Shrine Bowl QB and a commit to the University of Pittsburgh, where he will enroll early in the spring.  Jackson is a North-South All-Star and a finalist for Mr. Football 2018.  In a light rain, the Golden Hurricane built a 14-0 lead at the half off a pair of TD strikes by Jackson.  Wren pushed the lead to 21 on another Jackson TD pass.  Collin Wakefield finally broke through for the Red Raiders on a 7-yd TD run to make it 21-7.  Beville connected with Aziz Huff to start the 4th quarter as Greenville trimmed the lead to seven, 21-14.  But Tyrell Jackson got the last say as he added his 4th TD throw and a TD run to seal the deal for Wren and end Greenville's season.  The Red Raiders finish the year 7-4.

Travelers Rest football had a huge turnaround year.  After going 1-9 in 2017, the Devildogs went 7-3 during the regular season and grabbed the #4-seed out of Region II-AAAA.  TR had to travel to an experienced Ridge View team and the Blazers cruised to a 76-0 victory.  Despite the setback, the Devildogs made huge improvements in 2018 and return a corp of juniors, including QB Wilson Hendricks and WRs Jake Hall and Derrick Fields, as TR looks to be a consistent contender in Class 4A.