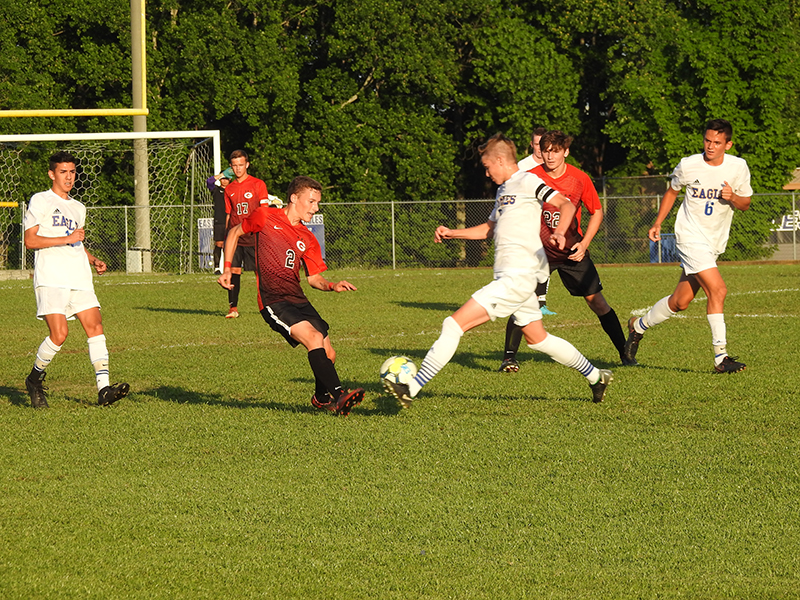 Eighty minutes of regulation,  20 minutes of overtime,  10 minutes of sudden death and penalty kicks, that is what it took for the Lady Eagles of Eastside High to defeat defending AAAA state champions South Aiken on Monday night.  Ansley Robinson's goal in regulation tied the match at one, after the Thoroughbreds scored early in the second half on a penalty kick to take the 1-0 lead.  Robinson just missed a second goal that deflected off the top bar and fell just out of the goal.  After that neither team was able to mount much of a scoring threat through overtime and sudden death.  The Eagles won the coin flip for PK's and watched as the first shooter for each team sailed their shot wide of the goal.  The teams exchanged a pair of goals making it 2-2 in PK's.  Following a miss by South Aiken, Robinson found the back of the net for a 3-2 advantage.  The T-breds tied it at three on their final shooter, leaving Madelyn Schechter with the final shot for the win.  Schechter slid a goal underneath the South Aiken keeper and propelled the Eagles to the 2018 AAAA State Championship on Friday night at 6:30 PM vs Hilton Head Island at Irmo High School.

The Lady Eagles will be joined by the boys soccer team, who will face Chapin at 8:30 PM on Friday night in the AAAA Boys Championship.  This is a game Eastside has been prepping for since Chapin ended Eastside's 2017 season  in the finals 2-0.  The Eagles have been sharp on defense, allowing only one goal through their first  four playoff matches.  Eastside has been so good on defense that in the Upper State match they played the entire second half with their back up goalie.  In a tightly contested match against county rival Greenville, the Eagles got a goal in the 74th minute by Nick Gregory to secure the win.  Now the Eagles have a chance to avenge last years defeat against a battle tested Chapin team.

Two more GCS teams will also be making the trip to Irmo High on Saturday and both return as defending state champions.  At 2:30 PM, Berea boys soccer will face Bishop-England in the AAA Championship.  The Bulldogs opened the playoffs with a dominating 11-1 victory over Camden.  In the second round they got a huge test against Walhalla, winning 1-0 and then defeated region rival Carolina 4-1.  This year Berea had to go on the road for Upper State, where they defeated Seneca 2-0.  The Bulldogs now face a tough Bishop-England team who edged out last years runner-up Bluffton in the Lower State final.

In Class AAAAA, the JL Mann Lady Patriots return as defending state champions having bested Wando in penalty kicks in 2017.  This time around the Lady Patriots will face a tough Lexington team that just eliminated Wando in the Lower State finals.  Lexington has been one of the top ranked teams in the state all season.  A tough task for sure, but one the Mann is prepared for having just knocked off Clover in Upper State, another team that was at or near the top of the ranking all season.  The Patriots defeated Clover 4-1.  Mann and Lexington are scheduled to play Saturday at 4:30 PM at Irmo High.