Berea and Mann Grab Back to Back Soccer Titles

Berea and Mann Grab Back to Back Soccer Titles 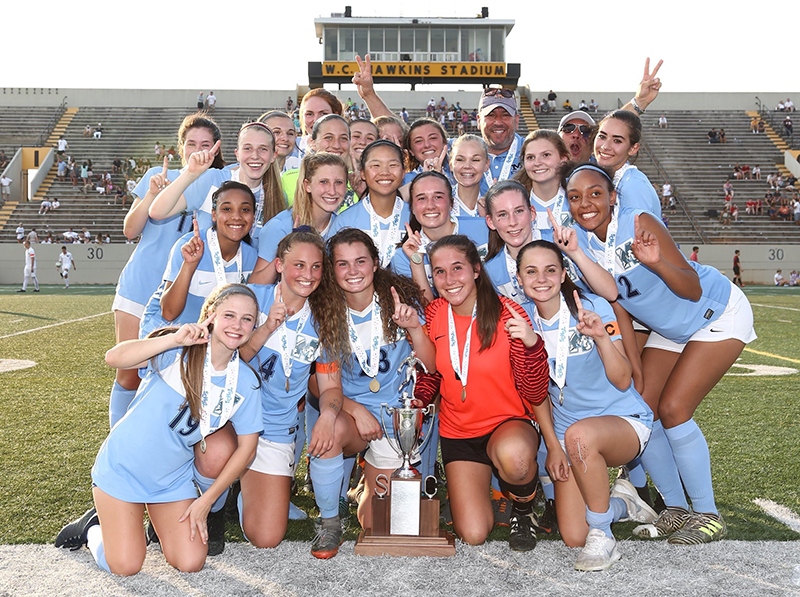 The Berea High boys soccer team went undefeated in winning the Class AAA title in 2017.  On Saturday the Bulldogs found their way back to the title match looking to go perfect again and Junior Perez made sure the Bulldogs were victorious.  Perez got the Bulldogs on the scoreboard first and after Bishop-England tied it at 1-1, Perez regained the lead off a nice assist from Carlos Pacheco.  Before the first half was over, Junior Perez nailed the hat trick and gave Berea a 3-1 halftime lead.  Bishop-England cut into the lead in the 61st minute.  Again the Bulldogs found Perez for his fourth goal of the day and the game winner as Berea held on to defeat Bishop-England 4-3 and claim their second straight Class AAA Boys Soccer Championship!

In AAAAA girls action, two of the most dominant programs in the state squared off as defending champion JL Mann faced Lexington, who entered the match on a 19-game win streak.  The Wildcats struck first on a Siera Kirby goal in the 38th minute, a lead Lexington would carry into the half.  Just :09 seconds into the second half the Patriots got the equalizer from Erica Manfre.  Two minutes later Carolina Conti scored to give Mann the 2-1 lead.  Conti later added her second goal of the match, the game winner as JL Mann defeated Lexington 3-2 to claim their second straight AAAAA title and their third in the last six years.

On Friday night the Eastside girls and boys competed in the AAAA soccer championships.  The boys team was looking to avenge their 2017 loss to Chapin.  Eastside would again face Chapin in a battle of Eagle mascots.  The two teams battled their way to a scoreless tie in the first half as both defenses were solid early.  In the 47th minute Chapin scored on a free kick from Josh Lochstamphor to take a 1-0 lead.  Eastside was unable to create an equalizer as they had to settle for runners-up to Chapin again in 2018.

In the girls title match, Eastside took a 1-0 lead just ten minutes into the match as Monique Jende scored on a free kick.  Four minutes later Hilton Head Island answered on a penalty kick by Carson Schoeppe.  HHI grabbed the lead before half 2-1.  In the second half, neither team was able to find the net as defense and ball control by Hilton Head Island took over and the Eagles fell 2-1 to finish as AAAA runners-up.