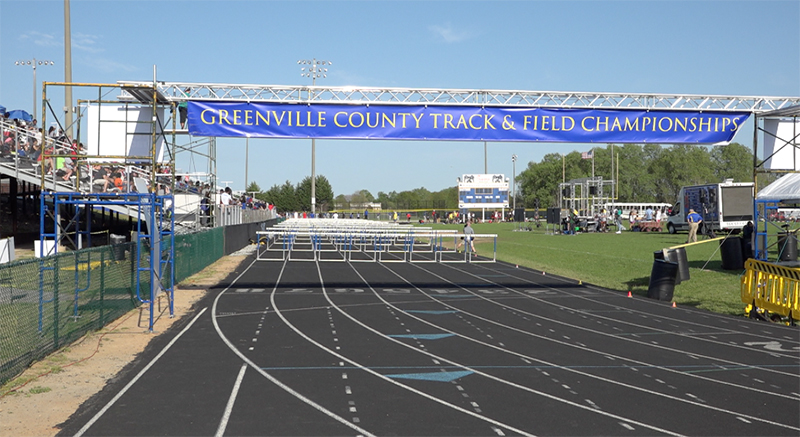 At the meet, the Hillcrest girls ran away with the team title, pun intended.  The Rams scored 152 total points, runner-up JL Mann amassed 66.  Greer placed third and Mauldin fourth.  Hillcrest dominated the sprints, winning the 4x100 and 4x400 (by :16 seconds) relays.  The Rams placed 2nd in the 4x800 behind JL Mann.  Sophomore Zariere Dumas took 1st in the 100 and 200 sprints to earn Female Track MVP of the meet.  Freshman Nya McGowan placed 1st in the 400.  Senior Adia Bennon won the 400 hurdles.  Freshman Keiran Martin won the long jump (17-09), placed 2nd in the high jump and 3rd in the triple jump to earn Female Field MVP of the meet.

Madison Ellis of Eastside High dominated the 3200 meter run winning by :15 seconds with a time of 11:39.86.  Greer's Kaiya Bradford defeated Jordan Haywood of Christ Church in the 100 hurdles in a photo finish.  Bradford's 15.25 was .03 seconds faster than Haywood.  Wade Hampton's Emily Klaeser jumped 5-04 to edge out Martin of Hillcrest.  Shawndra Coleman of Greenville jumped 37-10 to claim the triple jump title.  Mauldin freshman Jalani Adams won the shot put and placed 2nd in the discus behind Taylor Thornton of Travelers Rest.  In the 1500 race walk, Jesi Heiser-Whatley edged her sister Tori for 1st place.

It was a much tighter battle in the boys meet.  Greer had a great meet in the sprints and jumps to beat out Mauldin, who excelled in the field events, 122-102.  Hillcrest overcame some injuries to finish 3rd.  The Rams Demadgyai Croft won the 100 and 200 keeping the Rams on top the podium despite the loss of star sprinter Jake Kennison who pulled up in the 4x100 relay.  Greer was expected to battle Hillcrest in that relay, but the injury cleared the way for an easy Yellow Jacket victory in a new meet record 41.62.  The Rams took first in the 4x400 relay, again missing the head to head with Greer after the Jackets withdrew from the race.  Greer's Quavian White won Male Track MVP of the meet by winning the 110 hurdles, 400 hurdles and being part of the 4x100 relay.  For good measure White jumped 22-02 in only his second jump, a mark that held up the entire day allowing White to rest for the hurdle events.  Teammate Richie Sadler grabbed another 1st for Greer in the 400 and Coen Roberts added a 1st in the 1600.  In the 3200, Eastside's Noah White took 1st after finishing 2nd in the 1600 to Roberts.  Juan Salinas took 1st in the 1500 race walk.

Mauldin's performance in the field events kept them close to Greer and Hillcrest in the standings.  Logan Carroll set a meet record in the discuss on his first throw, going 171.  A few throws later Carroll bested that mark, reaching 176-05 and won the event by a whopping 36 feet.  Carroll came back Wednesday and won the shot put by more than 12 feet at 57-09.50.  Sophomore Andru Phillips got a win in the triple jump and freshman Adam Berry scored a first for the Mavs in pole vault.  Wade Hampton senior JJ Richardson won the high jump.  Thomas Clark raced 34.60 to earn a 1st place in the 100 meter wheelchair race.