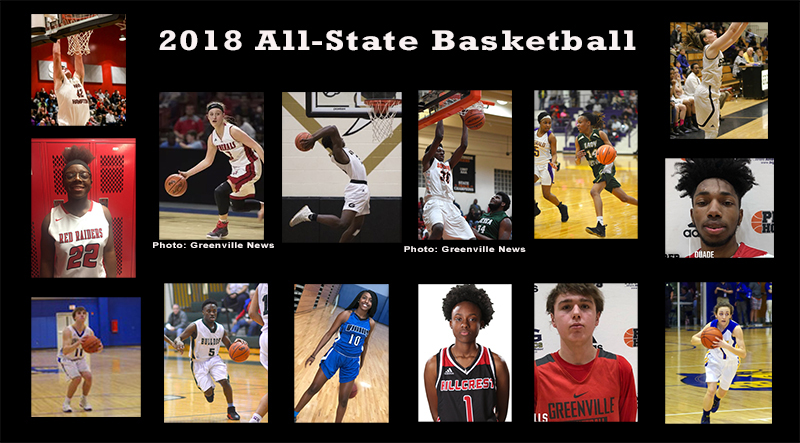 Jashiya Henderson, Berea - Class AAA Girls All-State - Jashiya Henderson averaged 20.6 points per game on the season and in region play she increased her scoring to 26.4 points per game in leading the Bulldogs to the Region II-AAA crown.  In addition, Jashiya added over 6 rebounds and 3 steals a game and finished the season as the Region II-AAA Co-Player of the Year.

Megan Jones, Greer - Class AAAA Girls All-State - Megan Jones had big shoes to fill for the Yellow Jackets this year and she did by powering Greer to a Region II-AAAA title while averaging 15.7 points per game and added over 4 assists per game while shooting better than 50% from behind the arc.  Megan is committed to continue her career at Erskine College.

Greyson Boone, Wade Hampton - Class AAAAA Girls All-State - After finishing last season as state runners-up, Greyson Boone was asked to take  on more ball handling responsibility this season and she still averaged nearly 15 points per game for the Generals.  Boone has Wade Hampton back in Columbia after leading the Generals to a  Region II-AAAAA title and back to back Upper State titles.

Laimani Simmons, Woodmont - Class AAAAA Girls All-State - Only a sophomore, Laimani Simmons is already a 2-time All-State recipient.  Laimani averaged 17.8 points with nearly 4 rebounds and over 3 steals per game as she helped lead the Wildcats to an undefeated record in Region I-AAAAA.  She has earned back to back Region Player of the Year honors.  Off the court, Laimani carries a 4.4 GPA.

Jamal Burke, Southside - Class AAA Boys Basketball - Jamal Burke has had a rapid rise in the basketball world.  Burke, a junior, did not start playing basketball until his freshman year.  Last season Jamal saw limited minutes on Southside's state championship team.  Despite returning 4 of 5 starters, Burke was able to crack the rotation for Southside this season and his play in the post helped lead the Tigers to an undefeated region title and the Tigers are back in Columbia to defend their AAA title.

Ta'Mious Young, Berea - Class AAA Boys Basketball - Ta'Mious Young is a little man with big talent.  The point guard averaged 20 points per game for the Bulldogs while shooting 80% from the free throw line and over 40% from behind the arc.  Ta'Mious added over 3 rebounds, 3 assists and 3 steals per game, earning All-Region honors as well.

Graham Burton, Travelers Rest - Class AAAA Boys Basketball - Graham Burton helped lead Travelers Rest to the Region II-AAAA title while collecting Region Player of the Year honors.  Graham averaged 16 points per game, 4 rebounds, 3 assists and 3 steals.  In addition to his on court success, Graham has a 4.959 GPA and is ranked 3rd in his class at Travelers Rest.

Chris Davis, Greer - Class AAAA Boys Basketball - Chris Davis averaged a double-double on the season, pouring in 12 points and grabbing 10 rebounds on average for the season.  Chris helped lead the Yellow Jackets to a second place finish in Region II-AAAA.

Wells Hoag, Greenville - Class AAAA Boys Basketball - Wells Hoag played a big role in the Raiders success this season, grabbing the Region I-AAAA title.  Wells averaged 15 points per game, shooting better than 84% from the free throw line and 41% from behind the arc.  In addition to All-State, Wells was named All-Region and was selected for the 2018 North/South All-Star Game.

Quade Parks, Greenville - Class AAAA Boys Basketball - Quade Parks averaged over 14 points, 5 rebounds and 3 assists per game and was named the Region I-AAAA Player of the Year.  Quade and Wells gave the Raiders an explosive back court which powered the Raiders to a region crown.

Will Edwards, Wade Hampton - Class AAAAA Boys Basketball - Will Edwards has been named All-State for the second time, in addition to 3 All-Region honors and being named the 2018 Region II-AAAAA Player of the Year.  Will averaged 17.4 points per game and grabbed 9 rebounds for the Generals who won Region II-AAAAA.  In his career Will has been part of 86 wins and two Upper State finals appearances.  On Senior Night he recorded his 1000th career point and has been selected to play in the North/South All-Star Game this year.

Congratulations to all of our honorees! See the entire All-State teams here: http://www.wbtw.com/sports/2018-scbca-all-state-basketball-teams/971938029