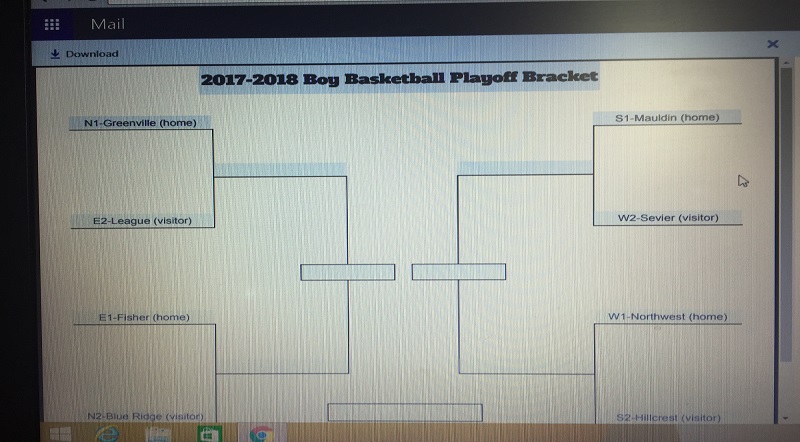 The 2018 Greenville County Schools Middle School Basketball tournament is set.  Games start Monday, January 29th with the top seed hosting the opening round games.  The championship games will be held Saturday, February 3rd at Wade Hampton High.  The girls will start at 11 am with the boys final to follow.

In the boys bracket, Mauldin Middle(10-1) enters the tournament winners of 10 straight.  The Mustangs went 8-0 in division play and have not lost since their opening game on the road at Northwest Middle on November 27th.  The final of that game was 45-41 in favor of the Panthers and the two could meet again in the semi-finals as they are paired on the same side of the bracket.  Northwest also went 10-1, their only loss coming on January 3rd to Fisher Middle.  The Fisher Firebirds (10-1) are the top seed in the East and Greenville at 9-3 is tops in the North.  Greenville will host League Academy who handed Fisher their only loss of the season.  Fisher will host Blue Ridge who won a tiebreaker in division to advance to the playoffs.  Northwest will host Hillcrest (8-4).  Defending county champs, Sevier Middle, grabbed the 2 seed out of the West and will travel to Mauldin.

On the girls side, defending champion Blue Ridge enters the tournament with an unbeaten record and returning a bulk of their 2017 title team.  The Tigers (9-0) aren't the only unbeaten team in this field.  Beck Academy is also 9-0 and the Hillcrest Wildcats are 12-0.  Beck hosts Greer and Blue Ridge hosts League in the opening round, setting up the possibility of the two unbeatens meeting in round 2.  Snow prevented the two from playing earlier in this month.  On the other side of the bracket Northwest (8-3) won the West and will host Woodmont (7-3).  Hillcrest will host Berea (6-5).

All games are scheduled for 6:00 PM unless noted:

Fisher vs Blue Ridge faces winner of Greenville vs League

Blue Ridge vs League faces winner of Beck vs Greer