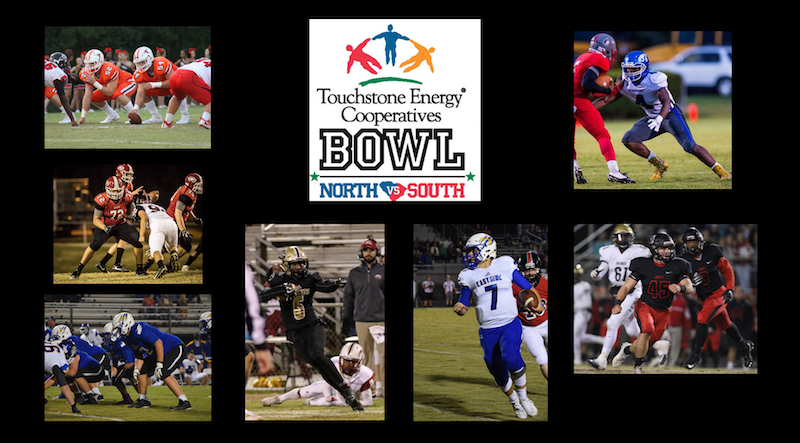 Seven Greenville County School football athletes were selected to participate in the 2017 Touchstone Energy North/South All-Star Game being held at Myrtle Beach on December 9th.  GCS will also be represented by two coaches on the North All-Star squad.  Meet the 2017 North All-Stars:

Jordan Morgan - QB - Eastside: Morgan was part of a breakout season for the Eagles under new head coach Dan Morgan.  Eastside compiled a 9-1 regular season, grabbing the #2 seed out of Region II-AAAA.  The Eagles averaged over 48 points per game and Jordan Morgan ran the show.  Morgan threw for over 3300 yards and 41 touchdowns while completing nearly 75% of his throws.

Will Posey - OL - Eastside: A big key to the Eagles prolific offense in 2017 was the play of their offensive line led by Will Posey.  Eastside put up over 5000 yards of total offense with Posey setting the edge for Morgan to get the ball to 1000 yard receivers Chance Pride and Payton Mangrum.  The Eagles also added 17 TDs and nearly 1000 yards on the ground behind Posey and the Eastside OL.

Cam Thomason - OL - Greenville: Greenville also saw a big turnaround in 2017, going from 1-10 early in Cam Thomason's career to a 9-1 regular season this year.  Greenville's balanced attack with QB Davis Beville throwing for over 2100 yards and 29 TDs meshed well with Danyaus Williams-Byrd and Collin Wakefield and the ground game churning out nearly 2000 yards and 30 touchdowns.  Thomason and the Red Raiders OL set the tone for a unit that averaged around 45 points per game.

Jacob Harris - DB - Greer: The Greer defense gave up only 125 points through the regular season and powered the Yellow Jackets all the way to the Upper State Finals.  Harris teamed with Shrine Bowler Qua White to lock up opposing receivers as the Jackets starting cornerbacks.  In the playoffs the dynamic duo helped the Greer D keep high scoring teams South Aiken and Greenville well below their season averages.

Garrett Sayegh - LB - Hillcrest: The Rams were a young, inexperienced group on offense early in 2017.  Veterans like Garrett Sayegh on the defensive side of the ball had to step up as the Rams developed on offense.  Sayegh and the defense were key in Hillcrest going 8-2 in the regular season and advancing to the 3rd round of the AAAAA playoffs.  Garrett  accounted for 117 tackles, 8 sacks, 4 forced fumbles, 1 fumble recovery and an interception this year.

Jackson Nash - OL - Mauldin: Jackson began his Varsity career as a defensive tackle, playing a portion of that 9th grade season with a broken hand that hindered his ability to snap the ball.  Once healed, Jackson became the starting Center for the Mavericks and he set the protection for two all region quarterbacks in Dre Harris and Mitchell Norman.  Nash was versatile enough to fill in at any spot along the OL during his four year career.

Isaiah McCullough - LB - Woodmont: McCullough entered his junior season in the shadow of all-star Davonne Bowen, but Isaiah quickly distinguished himself as an elite defender from the linebacker position.  McCullough carried the momentum of a strong junior campaign into this season, becoming a leader for the Wildcat defense and earning all-star recognition himself.

George Holtzclaw - Assistant Coach - Mauldin: Already a member of the SC Strength Coaches Hall of Fame, Coach Holtzclaw was selected to serve as an assistant coach to the 2017 North All-Stars.  Coach Holtzclaw, the strength coach and running backs coach at Mauldin High, will coach the backs this week in Myrtle Beach.