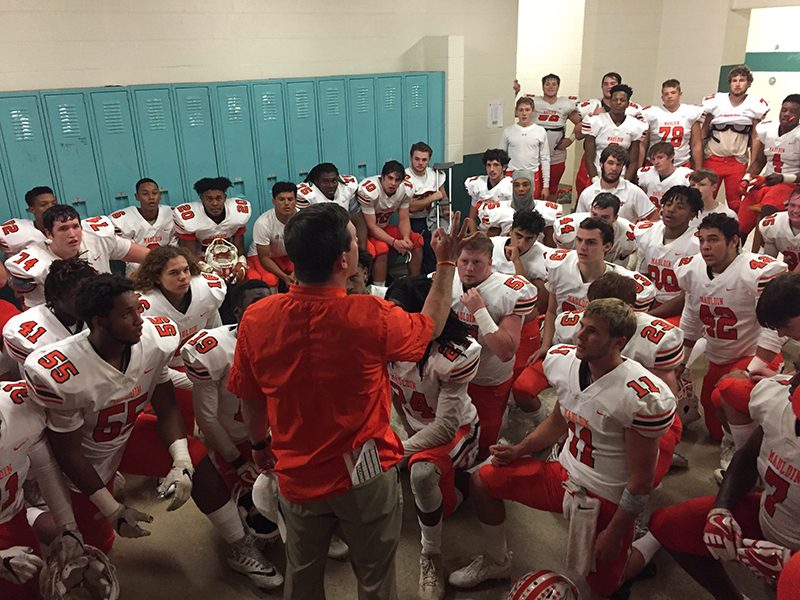 This season the Eastside Eagles offense has garnered most of the attention and headlines.  North/South All-Star QB Jordan Morgan has thrown for over 3500 yards and has a stable of weapons including a pair of 1000 yard receivers in Payton Mangrum and Chance Pride.  Meanwhile, the Eagles defense has flown under the radar, at least to those on the outside looking in.  Coach Dan Morgan and the Eagles staff knows what the Eastside defense is capable of and on Friday night the Eagle D made it known they were ready to make their presence felt.  Eastside held Westwood to 168 total yards, had three sacks, recovered two fumbles and snagged a pair of interceptions, including a pick-6 as Eastside rolled to a 48-15 victory in the 2nd round of the AAAA playoffs.  Eastside opened with a Morgan to Daniel Baldwin touchdown for a 7-0 lead.  DE Israel Taylor recorded a pair of sacks to stifle Westwood’s opening drive and Morgan put Eastside up 14-0 with a short TD to Payton Mangrum.  The Eagles special teams got in on the act, forcing a fumble on the ensuing kickoff which set up a Chance Pride TD run.  Jaimeer Goodman’s pick 6 pushed the lead to 27-0.  Westwood settled down and scored a pair of TDs before half.  Rather than surrendering momentum, Eastside stole it right back getting three rushing TTDs from Morgan and keeping the Redhawks offense from entering the redzone in the 2nd half.  Eastside (11-1) will travel to unbeaten South Pointe.  The Eagles will need another dominant performance from both their offense and their defense vs a Stallions team that has won their first two playoff games by a combined score of 112-17.

Over in Greer, Shrine Bowl All-Star Qua White reminded everyone what a big time, versatile player he is as he helped lead the Yellow Jackets to a 2nd round win over South Aiken.  White hauled in two TD receptions, scored on a kickoff return and added a huge 45-yard punt return for a TD in the 3rd quarter.  White opened the scoring hauling in a 42-yd pass from Trey Houston for a 7-0 lead.  RB Dre Williams pushed the lead to 14 catching a screen and racing 35 yards.  After a mishandled snap by Houston, the Thoroughbreds cut the lead in half.  White answered with a 72-yard kickoff return to push the lead back to 14 at 21-7.  South Pointe put together their best offensive drive of the night, punching it in after converting on 4th down two plays earlier.  Holding on to a 21-14 lead late in the half, Houston found White for their second score as Greer held a 28-14 halftime lead.  White’s 45-yard punt return in the 3rd broke the game open and moved the Yellow Jackets into the 3rd round where they will face longtime county rival Greenville.

Greenville advanced with an impressive 42-27 victory over a physical York Cougars team.  Greenville went right after the Cougars, beating them at their own game of power running right at the opposing defense.  Raiders RB Danyaus Williams-Byrd carried the ball 37 times for 192 yards and three scores.  On the second play of the game, Williams-Byrd raced 39 yards and let the Cougar defense know they were in for a long night.  Williams-Byrd scored all three TDs and racked up 174 of those yards in the 1st half as Greenville raced out to a 35-7 halftime lead.  Davis Beville added a pair of TD throws to Mack Braswell and Ty Hellams in the half.  Beville opened the 3rd with another TD strike to Braswell.  York closed with 20 unanswered, but it was too little too late.  Beville added 131 yards on the ground to go with his 3 touchdown, 122 yards passing.  Greenville heads back to Dooley Field to face Greer, the only team to defeat them this season.

In Class AAAAA, Hillcrest hosted a Spartanburg team that they had never beaten.  The Rams were 0-11 when facing the Vikings and had lost 19 straight to Spartanburg County schools.  Hillcrest got 104 yards rushing from Donte Anthony.  Anthony got Hillcrest on the board with a 61-yard burst.  He pushed the lead to 20-0 at the half with a pair of rezone TD runs.  After Spartanburg finally got on the board in the 3rd, Anthony answered with a 5-yard TD and a 26-7 Rams lead.  Hillcrest got another 84 yards on the ground from Collin Whitfield and Will Watts adding a rushing TD as Hillcrest advanced to the 3rd round of the playoffs 33-14, ending their skids vs Spartanburg and Spartanburg County teams.  Hillcrest racked up 249 yards on the ground and 400 total yards while the Rams defense held the Vikings in check, allowing only 184 total yards to the normally potent Vikings offense.  Travis Anthony recovered two Spartanburg fumbles and Garrett Sayegh scooped up a third.  Xavier Mathis added an interception as the Rams forced four Spartanburg turnovers.  Hillcrest (10-2) will host Gaffney, a team they lost to earlier this year and twice last year, including knocking the Rams out of the playoffs in the 2nd round last year.  The Rams, after getting over the Spartanburg hump, look to end their recent streak vs the Indians.

Mauldin also faced a Spartanburg foe, traveling to #1 seeded Dorman Friday night.  The Mavericks have been riding a strong defense and power run game this season.  Dorman cracked the defense early, jumping out to a 7-0 lead in the 1st quarter.  The Cavaliers pushed the lead to 10 on a 39-yard FG.  Mauldin responded with its own 39-yard FG from Ben Dority.  Cavalier QB Ben Batson broke free for a 58-yard TD, his second score on the day.  Again, Mauldin was able to answer as Cris Paez accounted for 76 of the Mavericks 77 yards on an eight play scoring drive, but a missed PAT left the score 17-9 at the half.  Mauldin opened the 3rd quarter with a 13 play, clock eating drive that got the Mavs inside Dorman territory, but a fumbled snap gave the ball back to Dorman.  The turnover opened the floodgates and Dorman scored on their next three possessions for a 36-9 victory.  Batson totaled four TD runs.  Cris Paez rushed for 71 yards and caught 7 passes for another 94 yards.  Mauldin finished their season 7-5.